There’s a true Hero of Humanity I want you to meet. He is a high-level religious leader in the Vatican (of all places!), who takes a heroic stand against the New World Order.

This courageous man is the #1 religious whistleblower in the world. First, he exposed financial corruption in the Vatican. Then he exposed systematic, organized, and protected child abuse in the Vatican. Next, he exposes how the Vatican is at the heart of the satanic New World Order.
The name of this passionate truth teller is Archbishop Carlo Maria Vigano.
When the world came under attack in 2020, archbishop Vigano rose to the forefront of the awakening army worldwide. He sent a revealing letter to President Trump, in which he warned of the plan of the globalist tyrants to create a worldwide dictatorship, under the guise of health emergencies. This letter was absolutely brilliantly written and testified of a remarkably bright and educated mind, inspired by a good, caring heart.
To everyone’s amazement, Trump tweeted this letter, sending its critical warning to the entire world. It opened the eyes of many millions!
Later archbishop Vigano published a more detailed warning to all of humanity, explaining in depth how highly organized criminal financial networks are collaborating to set up a tyrannical New World Order. This blazing letter was translated into dozens of languages and sent a thunder blast of mass awakening throughout the earth. Many, many millions woke up through these actions of one of the world’s most influential whistleblowers.

A bright light shines from the deepest darkness

It is a true phenomenon to see that archbishop Vigano operates from within the Vatican, because those of us who have gained a deeper insight, have come to understand that – to everyone’s surprise – the Vatican is where ultimately all the lines of spiritual darkness lead back to.

Vatican City State is a sovereign state within a state: an independent area in Rome, that is untouchable by the laws of Italy. That makes it a safe headquarters from where some of the supreme puppet masters operate.
Most of us only know the White Pope, who is the public puppet. He has very little power and serves to deceive the ignorant masses. Above the White Pope there is a Black Pope, who is less known, yet has real power over the worldwide criminal networks of the elites.
But at an even higher level, there is the Grey Pope, who operates entirely from the shadows, to influence the worldwide cabal. He is called “the most powerful man in the world”. The Vatican has from old been the headquarter of satanism (Luciferianism) and the heart of warfare against God. That is shocking for many people, as the Vatican presents itself as the center of the Roman Catholic religion.
This is how evil always operates: it always hides behind a mask of good.
The United Nations, World Economic Forum, and World Health Organization all claim to save humanity, while they destroy mankind as much as they can. Governments around the world claim to serve the people, while they suppress and enslave them. The pharmaceutical industry says they heal people, while they are the main cause of chronic health problems. Vaccines claim to save lives, while they cause genocide. News media says they inform the public, while it deceives everyone. Schools and universities say they make kids smarter, while in fact, they prevent them from being creative, independent thinkers. Religion says they represent God, while it all too often prevents people from truly encountering their Creator. Museums and libraries claim to be treasure troves of knowledge, while the true discoveries and knowledge are all kept from humanity, in cellars that stretch for miles underground. Law enforcement says they protect good citizens, while in reality, they are often the extension of the cruel claws of criminals.

This is the hallmark of evil: it always presents itself as the exact opposite of what it is. Demons appear as angels. Where can the devil hide better than in the church?
Remember, Christ was murdered by the religious leaders of that time! All true prophets were always killed by the religious authorities. It hasn’t changed. The worst of the worst in our world, present themselves as the holiest of all men.
Hypocrisy is the name of their game.
Because Vatican City State is at the head of this worldwide evil, it is miraculous indeed to see a man like archbishop Vigano stand up from within that stronghold of darkness. Seeing so much evil around you can push you closer to the light.

A worldwide alliance against the tyrants

Archbishop Vigano once again sent out a blazing light. In a compelling video, he explains what is threatening all of humanity, and he calls for a worldwide alliance to oppose the New World Order. 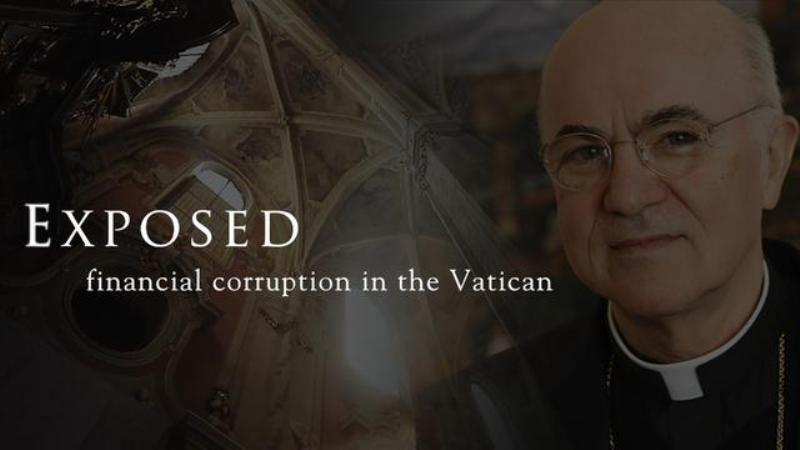