American stocks have been smashed after data on unexpectedly high inflation was released. And it has cost the uber-wealthy billions.

Inflation is still white hot in the United States.

Annual consumer price inflation (CPI) slowed slightly in August to 8.3 per cent from 8.5 per cent in July, the Labor Department said in a highly anticipated report that the Federal Reserve is watching closely.

However, CPI rose 0.1 per cent on a monthly comparison in August, after holding flat in July, according to government data Tuesday, a disappointing result amid widespread expectations that inflation would fall in the month.

The stock market immediately plunged on the news and the US dollar shot higher as data showed that US inflation slowed less than expected.

The Dow Jones Industrial Average fell nearly 1300 points in afternoon trading as the news triggered a rout on the New York Stock Exchange. Tech stocks were savaged, dropping by more than 500 points, or 4.4 per cent. America’s richest people lost billions as a result, with Jeff Bezos’s wealth plunging by $US9.8 billion and Elon Musk’s net worth dropping by $US8.4 billion.

The wealth of Mark Zuckerberg, Larry Page, Sergey Brin, and Steve Ballmer all declined by more than $US4 billion, while Warren Buffett and Bill Gates lost $US3.4 billion and $US2.8 billion respectively.

The price of Ethereum plunged 4 percent to $2389 and has shed 30 percent this year. 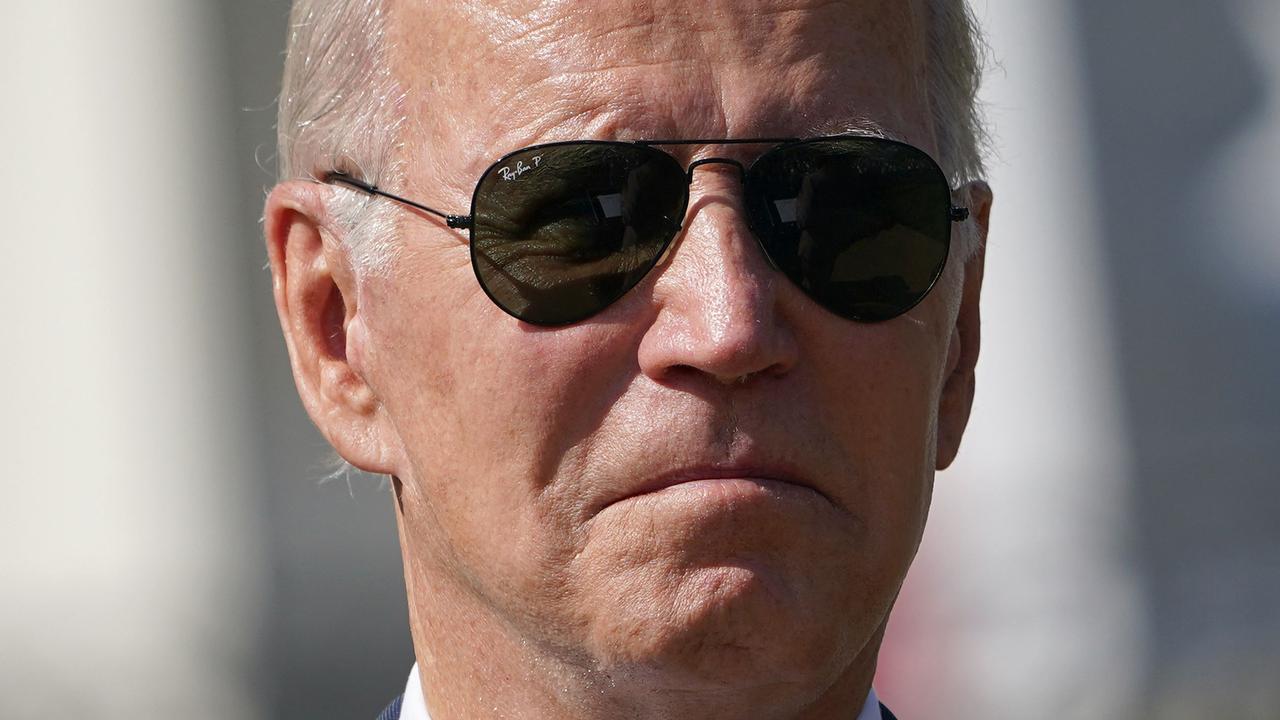 US President Joe Biden looks on before speaking during an event to celebrate the passage of the Inflation Reduction Act of 2022 on September 13, 2022.

Tech stocks were also dragged down in the sell-off.

It comes as rising inflation around the world pushes up the cost of living.

In Australia the annual CPI has jumped 6.1 per cent over the past year. The cash rate is now 2.35 per cent after a number of hefty rate rises as the RBA tries to return inflation to its 2-3 per cent range. Aussie stocks followed the US market and dropped sharply today.

“This month, prices overall were essentially flat, gas prices were down, and wages were up – that’s good news for American families.”

However, he acknowledged “it will take more time and resolve to bring inflation down.”

But markets reacted negatively to the news that inflation was falling at a slower pace than economists had expected.

The surprise result means it is increasingly likely the Federal Reserve will hike interest rates aggressively.

Chris Zaccarelli, chief investment officer at Independent Advisor Alliance, told the New York Post: “Inflation is the problem, but the key lies with the labour market.

“As long as unemployment is extremely low and consumers are confident in their spending, it’s hard to imagine a scenario where the inflation problem resolves itself.”

He indicated the Fed would need to make unpopular decisions in order to get prices under control.

“The Fed has the worst problem in the world — it’s a political problem, not an economic problem — and the only cure for the current crisis is one that is politically infeasible,” Zaccarelli said.

“If the Fed thought they were criticised too much by the previous administration (and they were), wait until they see the type of criticism they will be under as they deliberately create an economic scenario where unemployment jumps significantly.” There have been protests in the UK over the rising cost of living.

“Both headline and core US CPI were substantially hotter than expected in August,” Monex market analyst Jay Zhao-Murray said.

He added that this was “leading currency and fixed income markets to embark on a swift and dramatic reversal from recent price action, where traders and investors had largely positioned themselves for a softer inflation print”.

He pointed to core inflation that excludes volatile energy and food prices, which is what Fed policymakers pay particular attention to. This rose by 0.6 percentage points month-on-month, compared to a 0.3-point gain in July.

While markets were already largely pricing in another 75-basis-point interest rate hike by the Fed at its next meeting, there had been hopes that passing the inflation peak would allow the Fed to relent.

However, the inflation figures were “hotter than expected in August and put a chill on some of the peak inflation/peak hawkishness/soft landing chatter”, Briefing.com analyst Patrick O’Hare said.

Stocks, which had rebounded in recent days on hopes that a peak in inflation would allow a rapid end to hawkish rate hikes and thus avoid a recession and attain a “soft” landing of the economy, abruptly turned lower.

Gains in Europe swiftly turned to losses and Wall Street plunged. In late-morning trading, the Dow was down 2.7 per cent while the S&P 500 slumped 3.1 per cent and the tech-heavy Nasdaq Composite tumbled 4.1 per cent.

Fed boss Jerome Powell has indicated the rate increases would continue until inflation is tamed.

“While the narrative of peak inflation may well be still valid, getting it down from these levels is likely to be a much tougher battle,” he said.

Inflation has soared around the globe this year owing to sky-high energy and food bills.

This has been caused to a large extent by supply constraints after economies reopened from pandemic lockdowns and in the wake of Russia’s invasion of Ukraine.

The dollar has soared as the Federal Reserve moved earlier and more aggressively than other central banks to raise interest rates and contain inflation.

PrevPreviousMore and More Sound the Warning of a Major Global Crash Coming Soon
NextAlex Jones “Something BIG is About to Happen!!”Next