Nab closes down ANR Founder’s company and personal accounts with no reason provided as more anti Mandate and human freedom activists have their accounts shut.

National Australia Bank, One of Australia’s top 4 banks, closes down ANR Founder’s company and personal accounts, with no reason provided, as more anti Mandate and human freedom activists have their accounts shut.

This is on top of many other freedom activists having bank accounts mysteriously closed simply for being outspoken about the vaccine mandates.

The Canadian PM Trudea also had the Canadian Truckies bank accounts frozen, and other nations to as we move closer to a tryannical state where speaking out on social media about the right to human freedoms and civil liberties can see your account closed.

ANR Founder said it’s not the first time, as Westpac did it over a year ago. No wonder so many are moving to crypto and gold etc

It happens to a lot more people then you realise he said, but it won’t stop him from exposing Government and media corruption.

I’ve been at this for a decade now and have been targeted by Government agencies. They no longer intimidate me.

McIntyre recently promoted the idea of a breakaway Australian Republic as one way to take our nation back from the communist Nazis like Klaus Schwab, and his Great Reset Agenda. 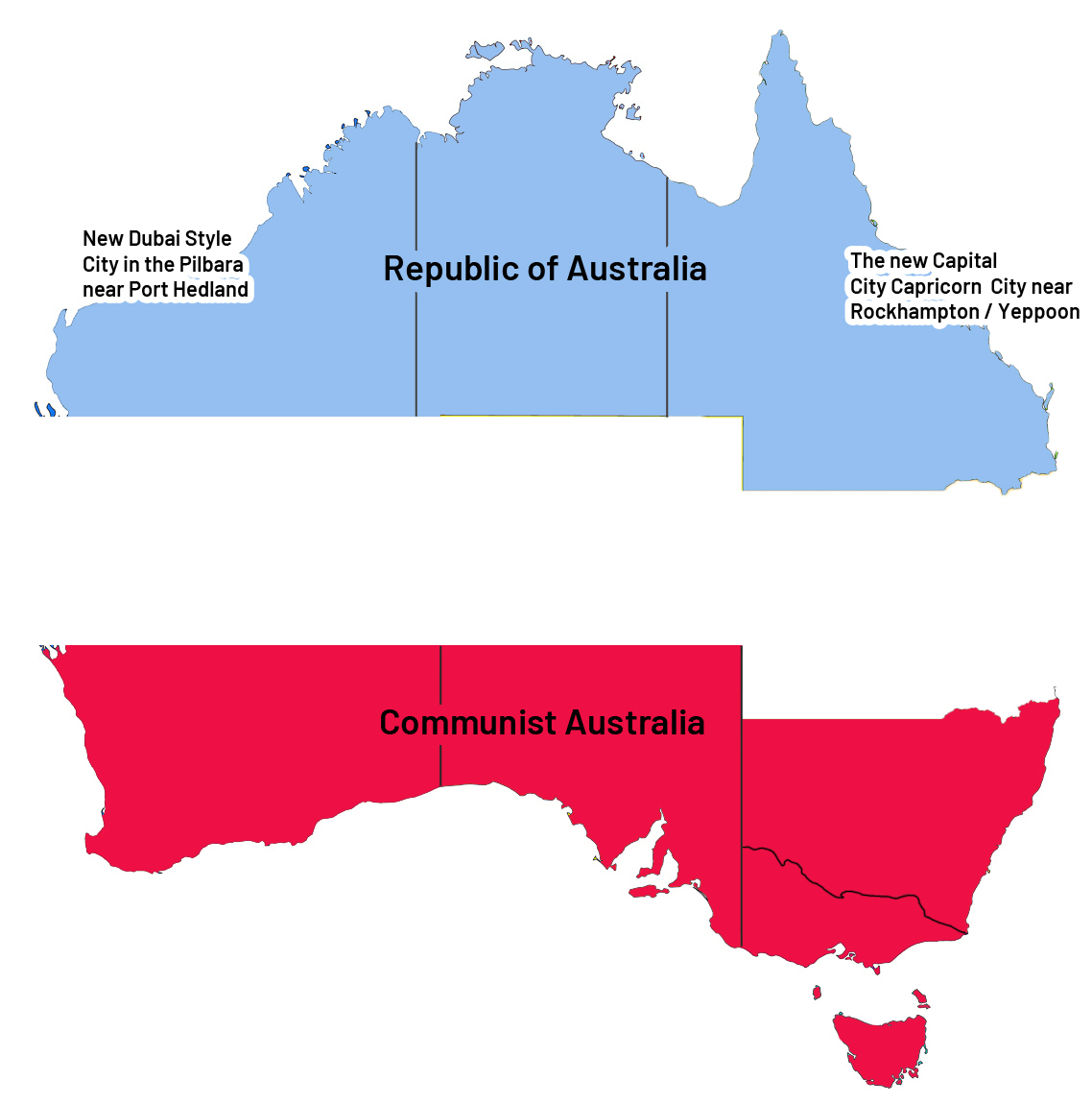 Plans are progressing for the top half of Australia to become a Republic, and break away from the rest of Australia, as many reject the Great Reset Totalitarian Globalists agenda, being pushed by Klaus Schwab of the World Economic Forum, and other billionaire left wing elites.

“Many Australians refuse to accept the outdated and corrupted and Globalists controlled political system in Australia any longer, especially after 2 years of lockdowns and crackdowns on our way of living.

Plans for both a parallel society, that defends human freedoms, civil liberties, less Government interference, with a real democracy, and a breakaway nation are afoot. The support is substantial and growing” a spokesperson said.

“After the largest political protest in Australian’s history in Feb, 2022, in the nation’s capital, Canberra, where an estimated 500,000 people peacefully protested the Government vaccine mandates, and Government extremism, and the Global communist agenda. The Globalists agenda has been pushed and supported by Prime Minister Scott Morrison (who has been in direct communication with Klaus Schwab re Australia’s support of the dangerous agenda, and State Premiers who violently cracked down on any Australian that supported democracy and human freedoms, under the guise of necessary crackdowns over the now known falsified Covid pandemic, used like a “ Trojan horse “ to attempt to usher in  a “new world order “, known as the “ Great Reset”.

“A parallel society will happen regardless, and will include at least 30% of the population, who refuse to be vaccinated, who refuse to accept Government vaccine extremism and medical malpractice and clear overreach and abuse of human rights by the current State and Federal Governments. This is a large economy on its own.”

“It will push for criminal sentences for all the politicians, Health Officials, business leaders, media presenters and executives who have been complicit in the Covid fraud. This fraud that’s lead to so many unnecessary deaths and injuries from the Covid Vaccines, which were never safe, effective or necessary as spruiked, but knowlingly fatal, ineffective and unnecessary, considering cheap effective alternatives that were fraudulently banned.

However, if enough support is achieved, then the possibility of a breakaway Republic will occur, with plans for the top half of Australia being separated from the rest.

It’s not the first time States or Regions have considered ceceding with WA often threatening to become its own country, and North Queensland and New England NSW their own states.

The new border for the New Republic of Australia, would either be at the NSW /Queensland Border, Northern Territory/ SA border and the top half of WA becoming the new National Southern Border and above that the new Republic of Australia. Or the border could be moved further South into NSW, to possibly the Sydney Harbour and Parramatta River becoming the National border to the South, effectively Splitting Sydney into two, and across NSW to the SA border and up to the Northern Territory/SA border, and once again Splitting WA in half.

This would give Australians a clear choice of which Australia they wish to live in.

The freedom loving North of Australia, becoming a Republic, that values human freedoms, civil liberties, informed consent, and protection of National Sovereignty, and the push back of Global Institutions, such as the corrupted WEF and WHO organisation and their totalitarian agendas. It would have much lower taxes, reduced bureaucratic red tape, increased manufacturing and defence and an entire new modern day education system, and a complete overhaul of the failed medical system.

Or those Australians who are closet communists, want Dictator Dan Andrews as a leader, want to continue with the cesspool of corrupted Canberra Politicians, want higher taxes, and a country that no longer supports Civil liberties, and human freedoms, a nation that can continue to bash and shoot at innocent protesters, and force mask wearing, lockdowns, mandatory vaccinations, track and tracing of citizens, introduction of a digital passport, and love Government overreach. They will be able to enjoy all these wonderful benefits in the old, outdated, communist, southern part of Australia, where statues of Klaus Schwab, Bill Gates, Anthony Fauci, George Soros and other Globalists elites and Dictator Dan Andrews and his communist Chinese backers will be erected, and can be celebrated by waving Red Flags.

The new Republic of Australia would proceed immediately to slash taxes, and the reduction of income taxes within 5 years to 15% flat rate, the creation of several economic free zones, and the establishment of two new cities to help de urbanise the nation, along with a push for regional Australian development and to develop the Norths untapped potential for food production.

One new city would be built, to become the new National capital of the Republic of Australia, which would be likely to be built a Central Regional part of Australia, potentially in Central Queensland, with an area between the regional city of Rockhampton (100,000 population) and Yeppoon (30,000) already scoped as a likely location, only minutes from a spectacular coast line. It’s a region with a lot of existing jobs, desperate to attract new workers, who could be enticed to populate the region, reducing crowding in major cities, and support the more de urbanised goal of the Republic of Australia.

A second large city, one that had concept plans and a video generated a decade ago, would be established most likely near Port Hedland in WA, to encourage less fly in fly out workers, and to populate this region, whose families could move to the new city, which has enormous number of jobs available in the nearby Pilbara Region.

The city would be built to attract major tourism, as being located closer to Asia, especially Singapore and Indonesia it has large international populations nearby.

Tenders would be considered for 5 large Entertainment/ Resort companies, to build large resort complexes in this new city to kick start it plus massive Government investment for affordable housing and grants to entice many to relocate and a major airport. Designed to help it become a major tourist drawcard, for both domestic, and international tourists, considering models such as Sun City in Africa, and Dubai in the United Emirates.

Ultimately the goal would be to take back the entire nation of Australia, and free it from the Globalists control, that has infiltrated our cabinets, and illegally stolen our nation under an effective coup, which is now apparent to the more knowledgeable that the Covid fraud was ultimately designed to achieve.

However, to take back an entire country, it often starts with taking back part of it, and making it a proven successful example of a better nation, and a better way of living that can inspire other regions and nations to adopt the new improved way to have a better functioning society.

The Republic of Australia movement, supported and endorsed by Take Back Australia, would seek input and ideas from a broad range of patriotic Australians, especially those who understand and see the dangers of unchecked rampant Globalism and the communistic Great Reset Agenda to our beloved Nation.

In such times, new ideas are needed and the development of a New Republic of Australia must be considered along with the building of a parallel society.

Australians deserve their country back, even if it’s one half at a time.

The New Republic of Australia will soon be put to an online vote to garner levels of support.

Satellite Images of where a New National City for the Republic of Australia could be built, halfway between Rockhampton and Yeppoon.

PrevPreviousFirst Mover Asia: Events in China, India Have Also Weighed on Crypto Prices
NextThere Is No Evidence of the Existence for Any Virus Isolated by Anyone Anywhere in the World! Part 2Next