I offered them my source data for them to verify and discuss any issues in a livestream. Their response: crickets.

On August 10, Fox News gave me a news slot. I wasn’t going to throw away my shot, so I let the cat out of the bag. Will Fox News now check my data? So far, no interest.

Someone had to go on Fox News and tell the truth about the vaccines.

I explained just how dangerous the vaccines are including the hundreds of thousands who have died and the millions who have been injured.

After I recited the stats from Wayne Root’s wedding (which were subsequently validated in other surveys), the host, Brian Kilmeade, said that “we can’t verify those numbers.”

You can hear the numbers confirmed directly from Wayne Root himself in this video along with some of the stories.

I offered Fox and Media Matters the opportunity to verify my numbers.

After all, if I’m found to be telling the truth, that would be game changing.

Neither organization has taken me up on my offer.

You are supposed to take their word for it that I’m wrong. Data doesn’t matter.

Links to the video

Here’s where you can watch the video and read the comments:

Selected articles about the segment

Media Matters called me a liar

Here is the article that Media Matters wrote: Fox News guest lies about the COVID vaccine killing “hundreds of thousands” and says it’s “the most dangerous vaccine ever created.”

I tried to comment on that article on their website, but they can’t take any criticism of their articles. Check this out:

So I responded with this nice email to them:

I followed it up with another email offering them all the source data:

I am writing in reference to this defamatory article which claims I am a liar:

I am willing to make all the source data backing my claims available to your team.

I want to discuss the data in a recorded livestream.

Are you willing to do that?

Someone is camera shy. And it isn’t me.

Next step for Fox News: verify what I said

I also invited Fox to verify my numbers.

They can even run their own surveys with the same or different methodology.

Or they can verify the over 900 data points I’ve now collected (I have the contact info for all the respondents), the Nextdoor survey I did, Wayne Root’s story, and they can view all the polls we did.

Or they can see if they can find any anecdotes that are the polar-opposite of Wayne Root’s story, i.e., where it is the unvaccinated who were injured and died while the vaccinated had no injuries or death. I’d love to see that one.

I tried and I couldn’t find a single anecdote like that. Here’s the proof:

Maybe Fox will have better luck than I did, but when you have a ratio of 437:0, that’s statistically significant that the vaccines are a disaster. Here’s how the numbers work out (a p-value of 1e-81 means that this didn’t happen by chance):

My $1M offer to Media Matters, Fox, and anyone else who thinks I’m a liar

See this article which was updated to add a bet about what I said on Fox. It’s bet #15.

This is an opportunity for anyone who thinks I lied to make a lot of money really fast.

Note that, to date, nobody has accepted any of the $1M bets I have outstanding. I even lowered the threshold to $200K and still no takers.

But if I took the opposite position on each of these topics, I would be inundated with people accepting my bet.

So there is nothing wrong with the process. People who claim that my offer is a gimmick are gaslighting you. It’s not gimmicked at all. I want to bet you because I have the facts on my side. I know what the data says. With an impartial panel, I’ll win 99% of the time (in the other 1%, you get bad judges).

It’s just that nobody in the world has any confidence that I actually got it wrong on any of these things. Not even Pfizer or Moderna will challenge me. They have money to spare to clear their reputation and prove I’m a misinformation spreader. Why aren’t they doing that?

I now have fifteen $1M bets and not a single taker.

The bottom line is this: Some people have conviction in their beliefs. Others, not so much.

Was Wayne Root telling the truth? Watch this new video where I interview Wayne and judge for yourself.

Since his wedding 8 months ago with 200 in attendance, Wayne observed:

Some people claim that a study with 200 people can’t be valid. Was Wayne simply “unlucky”? Highly unlikely. I’d have to had to cherry picked it from 100M samples to find a sample like that.

Could Wayne have been lying? I’ve talked to Wayne many times and his story is always consistent. Why would he lie? What’s his motivation? And he’s been telling this story for a while as it unfolded. All in public view. The entire time.

But just to make sure, I did my own survey that was independent of Wayne’s numbers. Wayne’s numbers were confirmed in my survey of 600 readers. You can see from that article that the data from my readers matched Wayne’s numbers very closely.

That is how bad the vaccines are. Really bad.

Wayne is 61 years old and only a few of his friends have died in his entire life. So how can 8 of his friends suddenly die, all vaccinated within an 8 month period? Seems pretty unlikely.

It’s very easy to find other stunning anecdotes, all negative for the vaccine. This “problem” is happening everywhere. The only question is whether people are paying attention. Read this post by Anita Jader. She’s paying attention. Have you ever seen a post like this in your life? Do you think this is “normal”?

Presumably FOX will be able to explain all of that.

Here’s my interview with Wayne. Does this sound like a guy who made up these stories? And his stories just matched the survey I did after I talked to him. Hmmm….

If the vaccines are so safe, then why was there a 30X increase in medical treatments in Germany after the vaccines rolled out?

But only 78% are vaccinated so that is a 5% injury rate for people who were vaccinated. That is insane for a vaccine. We were told that the vaccine was safer than a placebo!

That is a 30X increase from previous years.

Funny, my surveys found a 25X increase in injuries. What a coincidence!

Does this look safe and effective to you?

Something BIG happened in 2021. Can you guess what it was?

A simple Gab poll shows that there never was a pandemic; most of the deaths were caused by really poor hospital treatments, not COVID. Fact check this one!

Check out this survey on Gab:

There are around 128M households in America and it appears from this survey that fewer than 1 in 1,000 had a true COVID death. So that would only be around 125,000 COVID deaths.

Should we trust a Gab survey? That one seems pretty hard to explain.

But just to be extra safe, it turns out that our Gab results were consistent with death record data from New Mexico where 5/6 of the COVID deaths didn’t die from COVID. You can tell this from the ICD-10 codes of the deceased.

So the COVID problem is much smaller than they led us to believe and most of the deaths are due to the crappy hospital protocols which never change.

Rewarding hospitals with huge bonuses when they kill a patient is a good way to bump up the death numbers as well. Why aren’t any Democrats talking about that perverse incentive? Is America the only country rewarding hospitals who kill people?

Why not reward hospitals for saving COVID lives???

Note to my readers

This is why I’m not in politics because I think we should incentivize the results we want. Clearly, it appears that nobody in Congress agrees with me since nobody is proposing this. I think they don’t want to end the pandemic. They are certainly behaving that way.

And now we know they lied to us about HCQ too

This article just came out about hydroxychloroquine: 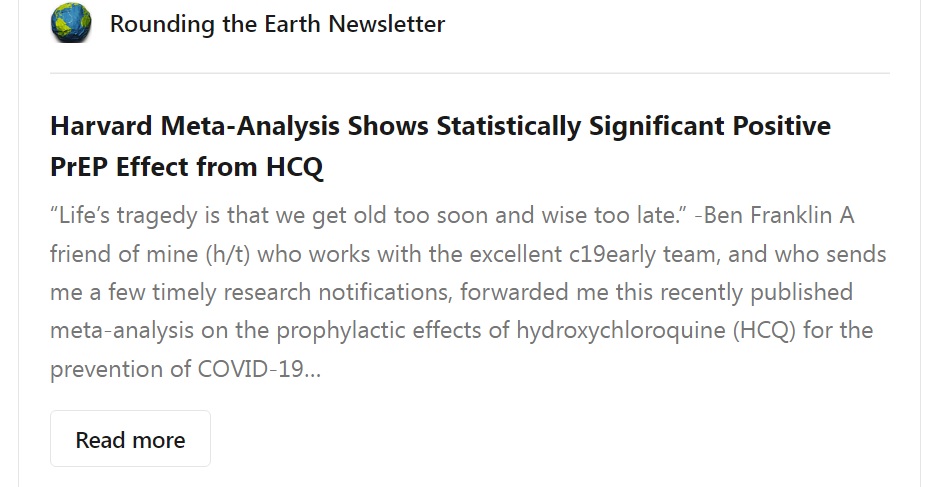 Please defend me on social media

I’m banned for life from Twitter, LinkedIn, Medium, and other platforms.

I’m not banned from Facebook because I don’t post anything there anymore. I learned my lesson when I told my friends I’d be featured on 60 Minutes and Facebook blocked my post and said if I did it again, they’d suspend my account.

This means that the misinformation claiming I’m wrong gets amplified without corrective feedback.

Few people who comment on Twitter read this article. They just hear what they heard on TV and then pontificate without doing any research.

Here’s an example post where the poster hasn’t done a p-value calculation, isn’t aware of all the evidence that aligns, and jumps to conclusions that are all wrong:

Boomerang1976 apparently isn’t aware that the CDC hasn’t done a study like Wayne Root’s for any vaccine. Why isn’t he criticizing the CDC for not doing any of these studies for any vaccine? Why pick on me? This isn’t my job to do the studies. I’m only mentioning studies like Wayne’s because there aren’t any formal studies available looking at two randomized groups for all cause mortality and morbidity post-vaccine.

Some people come to my rescue:

In other words, this poster is recognizing a >10X increase in deaths, consistent with the 20X higher risk of death finding in our survey.

Maybe I’m on to something after all.

The simplest way to respond to these comments is simply to point people at this article.

Fox News, Media Matters, and any other mainstream news organization has an opportunity to verify my numbers. I will happily share all my data with them.

I only ask for the opportunity to discuss any objections or issues they have with them in a recorded conversation before they publish it.

So far, no one is interested in my offer. Nobody wants to see the truth come out.