Why does the PayPal founder need a ‘doomsday prepper’ lodge anyway?

Because while they want to lock you in a pod like an animal, they plan to live lavish lives.

Anyway, sucked in. He lost his attempt. You eat the bugs, Thiel. 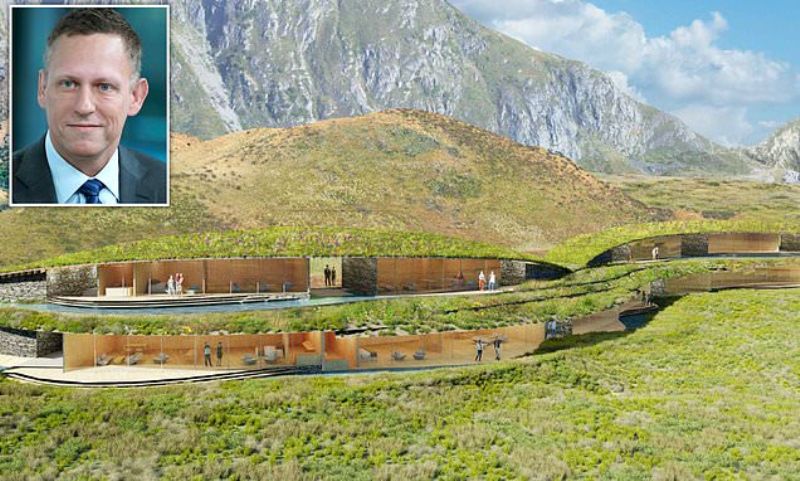 Billionaire PayPal co-founder Peter Thiel has lost his bid to build a multi-million dollar underground ‘doomsday lodge’ next to a New Zealand lake after district coucillors ruled it would ruin the area’s famed natural beauty.

Thiel, who is worth an estimated $7.7billion, had been applying to build a sprawling bunker-like compound containing a spa, ‘meditation pod’ and library overlooking Lake Wanaka on New Zealand’s pristine South Island.

But the Queenstown-Lakes district council on Thursday turned down the application following outcry from environmentalists who said it would ‘destroy our beautiful lake environment’.

The property, currently used as a working farm, was purchased by Thiel in 2015 for a reported $13.5 million, through his company Second Star Limited.

Thiel, who has owned a number of properties in New Zealand over the years, appears to be one of many billionaire doomsday ‘preppers’ who view the island nation as the ideal bolt-hole for riding out a global catastrophe.

The Pacific nation’s geographic isolation, stable government, sparse population and ability to operate self-sufficiently in terms of food, water and energy all make it an attractive locale for the jet-setting prepper.

Several years ago, Thiel drew an uproar when documents emerged showing that he had been granted New Zealand citizenship in 2011 after spending just 12 days in the country, far short of the usual 1,350-day residency requirement.

The government documents cited Thiel’s ‘exceptional circumstances’ and ‘his skills as an entrepreneur and his philanthropy’ but observers said the expedited citizenship process was akin to that reserved for Cold War defectors.

Thiel – an outspoken libertarian and ex-Trump supporter – has owned other property in New Zealand, including a $4.8 million four-bedroom home in Queenstown, and another property in Auckland.

His friend and fellow billionaire Sam Altman said in 2016 that he planned to flee to New Zealand with Thiel in the event of a global catastrophe, believing it the safest place to out-last doomsday.

In their ruling on Thursday, the Queenstown-Lakes district council said Theil’s sprawling luxury bunker at Lake Wanaka would ‘be of a sufficiently large scale and impact that it will draw the eye and be inappropriately dominant.’

In doing so, they rejected arguments put forward by Thiel’s lawyers that objections were put forward on the basis of ‘environmental protection at all costs’.

Plans for a ‘meditation pod’ at the house had been scrapped during the application process to try and appease campaigners, but when inspectors visited the site they were troubled by how large the home would be and how visible it would be from different points around the lake.

Embedded into the landscape, creating the property would have involved works spanning a total of 18 acres, according to The Guardian.

In a six-page letter to Queenstown Lakes District Council, the Upper Clutha Environmental Society said it opposed the application in its entirety and claimed the buildings would be an eyesore on the natural landscape.

The Society argued Mr Thiel ‘has not meaningfully avoided, remedied or mitigated adverse effects’, calling the proposals ‘inappropriate’ and adding that the development is ‘extremely unlikely’ to meet the ‘reasonably difficult to see test’ set by the local council.

Longview Environmental Trust argued the location was inappropriate and would be highly visible. And local resident John Sutton said in a submission to council that the lodge would ‘destroy our beautiful lake environment’, The Guardian reported.

In total, the council received seven formal submissions opposing or asking for changes to the plan, and none in support.

In a consent application for the lodge on his property, Second Star Ltd – a company owned by the entrepreneur – said the development would include a ‘pod’, water features and meditation space.

‘The green roofs are to be planted with the same range of plants (and occasional rocks) that occur on the surrounding hillock landforms’.

It also describes ‘a series of stand-alone buildings, including a lodge for visitor accommodation for up to 24 guests, accommodation pod for the owner, together with associated lodge management buildings, infrastructure, landscape treatment, water features and meditation space’.

The earthworks required to build it would cover over 73,700 sq m of land.

Details of the development, designed by Tokyo Olympic Stadium architect Kengo Kuma and Associates, emerged in a planning application in August.

They show several buildings that are designed to blend into the landscape, a private home built into a hillside as well as a larger luxury lodge with enough space for 24 people.

The application states: ‘The applicants seek to develop a lodge for visitor accommodation purposes, which comprises three individual structures but constructed as one building, which are described in the landscape assessment as a series of pods.

‘The Owner’s Pod, back of house and a meditation pod will also be constructed. All buildings will be constructed near the building platform identified on the title.

‘The lodge is designed in a manner that integrates the building forms into the context of the landscape and the site whilst providing each guest room with uninterrupted north-facing views towards Lake Wanaka and the Southern Alps.

‘The lodge location provides the benefits of relative proximity to Wanaka and the shopping, dining and cultural experiences that are available, whilst also providing guests with a sense of remoteness.

‘The lodge can accommodate up to 24 guests (two per bedroom) and an additional six people in the Owner’s Pod. Up to 15 staff will attend the site at peak times, none of whom will reside on site. An informal walking track is proposed (compacted hardfill subbase with an amenity gravel applied to the top surface) around parts of the property as shown on the Landscape Plans, with specifically located viewpoints where guests can admire the view.

‘The meditation space is proposed as a quiet space away from other buildings, to allow guests to reflect, meditate and take some time out.’

In 2017, it emerged that Mr Thiel was granted citizenship by the New Zealand government. Normally, the route to citizenship requires applicants to be in New Zealand as a permanent resident for at least 1,350 days in the five years preceding an application.

However, the government waived the requirement for Mr Thiel on the basis of his entrepreneurial and philanthropic activities.

The entrepreneur first visited New Zealand in 1995 when he was 28, according to an in-depth investigation by The New Zealand Herald – and is also a big fan of The Lord of the Rings movie trilogy, which was filmed in New Zealand.

New Zealand is seen by Silicon Valley tycoons as a destination to avoid government influence, and has become a popular destination with the super rich in recent years.

One of Mr Thiel’s PayPal co-founders Reid Hoffman, who later went on to create LinkedIn, told the New Yorker said New Zealand was seen as insurance for the collapse of the United States.

‘Saying you’re ”buying a house in New Zealand” is kind of a ”wink, wink, say no more”,’ Mr Hoffman said.

Authorities defended their decision to grant Mr Thiel citizenship saying he had been a great ambassador and salesperson for the country.