The Strange and Alluring Mystique of BeReal

The Strange and Alluring Mystique of BeReal

The new social media app is selling a dream of authenticity online — it’s certainly interesting to look at:

TO PARAPHRASE CHER Horowitz, searching for authenticity on a social media app is like trying to find meaning in a Pauly Shore film. Yet that hasn’t stopped Silicon Valley from trying. Apps like VSCO, Cluster, We Heart It, and Dispo all aim to take the pressure off curating one’s flawlessly Valencia-hued Instagram grid in favor of a grittier and more real social media experience, as if there were such a thing.

Social media is an inherently inauthentic experience, one that relies on playacting various expertly curated personae to a select audience of followers. Whether you’re posting latte art from your NOLA vacation or trying to craft the perfect Jordan Peterson quote tweet dunk for clout, there is a tacit understanding that you’re not behaving anything like your real self, because that version of you is far more boring than the one you put out online.

One app, however, is willing to bet that your real, authentic self — zits, raccoon eyes, flyaways and all — is a lot more interesting than you think. BeReal, a French photo-sharing app with a mind-numbing valuation of $600 million, is a combination of Instagram stories and Snapchat, joining the ephemerality of the latter (you can only post once a day, which disappears after 24 hours) with the mundaneness of the former. Because the app sends you notifications reminding you to post every day — and because you can’t see your friends’ posts without posting yourself — you’re basically required to post what you’re doing, regardless of whether it’s interesting or not, which means your feed tends to be full of a lot of poorly composed photos of laptop screens and swivel desks. To add insult to injury, the app also requires that you post a selfie with every photo, and there are no filters or editing software you can add to make that bleary-eyed TweetDeck stare look any better. The app’s rather ominous mission? To help you “discover who your friends really are in their daily life,” according to its website. (BeReal declined my interview request, directing me instead to a press packet, which I suppose is their right for $600 million.)

Given these myriad limitations on what you can post, one would think BeReal would be a massive flop, a venture relegated to the margins of tech startup history like Yo or Cuddlr or Whisper or Lulu. Yet it has flourished among an audience of zillennials exhausted by the hyper-FaceTuned aesthetics of their Instagram feeds. “There’s a spontaneity about it which takes the edge off,” says Joey Gingold, 28, a product manager at a parametric insurance firm. His first photo wasn’t particularly exciting — it was of a sidewalk he happened to be walking down when he received a notification reminding him to post — but then again, that’s kind of the point: As he puts it, BeReal provides a glimpse into the actual realities of its users, however mundane they may be, serving as a reminder to stop and appreciate the little things. “I have always thought that taking pictures is kind of a [reminder] to be ‘in the moment,’ even if it’s silly,” he says. “The notification BeReal sends is kind of a trigger to drop what you are doing and recognize the moment in a way.”

The fact sheet the company provided to me when I reached out for this story includes the following rather dramatic pronouncement: “Warning! Be-Real will challenge your creativity. BeReal is life, real life, and this life is without filters.”

Since downloading the app a few weeks ago, I have not achieved similar moments of Zen clarity; mostly, using the app has served as a reminder to me of how truly boring my everyday existence is. (Most of my photos are variations of me lying down in bed typing on my computer, my chin in the selfie shot angled at various unflattering positions.) What it did do, however, was serving as a reminder to me that other people’s lives are just as dull and non-photogenic as my own. 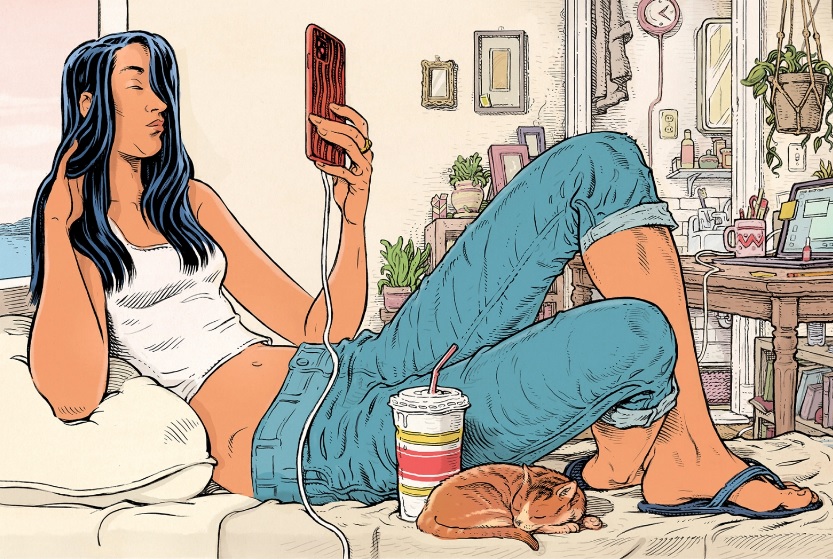 Because I am somewhat outside what I assume is BeReal’s target demo of terminally jaded, wide-leg-pants-wearing zoomers, I only have about six or seven friends on the app, but all of them were posting pretty much the same type of content I was: goofy, unposed mid-work selfies; day trips to museum exhibits; and the occasional road-trip vista shot or two. It turned out to be a starker departure from my friends’ typical, hypercurated Instagram Stories than I had expected: a truly authentic moment in time, however fleeting it may be, no snarky caption or sleek filter required. And it did feel voyeuristic in a way to peek into the lives of people I don’t even know particularly well: Even if they weren’t showing me anything they thought was interesting, I certainly thought otherwise.

As mainstream media dies, Truth Group and its platforms expect to rise as alternate independent media and alternate social media is booming. Every billion in market cap Facebook lose is for other censor-free social media companies like Truth Group to gain.

Other social media start-ups that are showing promise include Truthbook.social mostly because of the demand for censor-free platforms. Truthbook.social the alternative to Facebook with tens of thousands of users already posted over 150,000 posts in the short time since its soft launch, with many becoming available soon.
Many are sick of so-called Facebook “fact checkers” telling them what’s a fact and what isn’t.
A Rumble like Be Real has been a chart-topper.

TruthBook.social said apart from being a censor-free alternative to Facebook, many like it as it’s not a platform to impress people you don’t really know or don’t like, but more like joining a community of awakened people who like to discover the truth of the world and share the truth, as opposed to being distracted with meaningless excess selfies and trying to get as many likes as possible.

Truthbook.social is staggering its growth by limiting the number of users that can join every month as size isn’t always better it said.
A community of real authentic people is more important than one of the shallow and fake people only allowed to share the false narratives set by intelligence agencies and Big Tech billionaires.