Journalist and political commentator Emily Jashinsky said Mark Zuckerberg is using metaverse to “normalize” virtual reality worship, working, socializing and playing “because the more time we spend in the metaverse, the more money he makes and the more control he has.”

And according to Mark Zuckerberg, the company also has a new mission: to be “the successor to the mobile internet” and a “virtual environment where we can hang out, shop and work.”

But journalist and political commentator Emily Jashinsky has a different take on Zuckerberg’s metaverse.

“One of the most powerful companies in human history is planning to trap us in virtual reality,” Jashinsky said.

“Zuckerberg is rapidly positioning himself to be the world’s largest landlord, and he is using the same utopian language he used 15 years ago to convince everyone that Facebook would be a global force for good.”

Jashinsky said the difference between now and then is “now we know he wields his power to make us angrier, lonelier, dumber, less healthy and more addicted.”

In July, Zuckerberg explained his plans for the metaverse in what Jashinsky termed a “deeply disturbing interview” with The Verge.

In the interview, Zuckerberg said he envisioned a future where everyone sported virtual reality-equipped eye glasses, allowing people to engage with the internet “more naturally.”

He described the metaverse as “a persistent, synchronous environment where we can be together, which I think is probably going to resemble some kind of a hybrid between the social platforms we see today, but an environment where you’re embodied in it.”

Jashinsky said the same month The Verge published its interview with Zuckerberg, Facebook CEO Sheryl Sandberg told the New York Times Facebook’s hope is that one day, “people will host religious services in virtual reality spaces” and “use augmented reality as an educational tool to teach their children the story of their faith.”

Sandberg told The Times, “Faith organizations and social media are a natural fit because fundamentally both are about connection.”

Jashinsky said metaverse is “cloaking its new technology in the very same language that Facebook was pitched to us.”

She explained how Facebook was originally described as a “fuzzy abstract technology that will connect us, and that connection will be wonderful.”

“We now know this presumption was naive and destructive,” Jashinsky said. “The oligarchical plan to transfer more of our lives onto their platforms should be regarded as nothing short of an emergency.”

“Worship is just one aspect of everyday life meta wants us to substitute for virtual reality,” Jashinsky said. “Their control over the coming virtual spaces will give them more control over the human experience and our culture.”

Jashinsky told viewers platforms like metaverse “are cynically positioning themselves as basically the real estate kingpins of the future because they want to be the global landlord of every [virtual reality] church, gym and office space.”

According to World Economic Forum “strategic partner,” Cognizant, the future of work and play will in fact take place in the “safer” virtual world.

Cognizant claims that in 2025, “after the virus,” houses will be retrofitted with special offices and work spaces which double as spaces to “virtually socialize.”

The multinational technology company suggested these spaces will be fitted with cameras, soundproofing and lighting. The company called these virtual reality rooms “the new pub” where you can “socialize safely.”

Jashinsky said Zuckerberg wants to normalize virtual reality worship, working, socializing and playing “because the more time we spend in the metaverse, the more money he makes and the more control he has.”

“Zuckerberg has spent 15 years proving he’s a terrible steward of money and power — we’ve run the experiment and Facebook failed,” she argued. 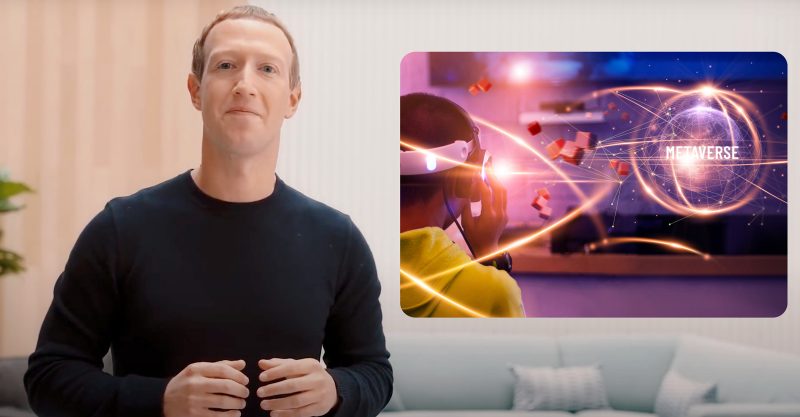