You know the story of Mike Lindell. He’s a God-fearing Christian. He’s an entrepreneur. He’s an inspiring personal story, a man who hit rock bottom, but turned it all around thanks to the power of Jesus Christ and his own brilliance. And of course, he’s a great American patriot. When every other company is desperate to outsource as many jobs to China and Vietnam and Bangladesh as possible, Lindell built his business right here in America, in my own state of Minnesota.

Mike Lindell should be a hero to all Americans, everywhere in the country. And really, he is, to the majority of those who know about him. But our elite class sees Mike Lindell as somebody to be crushed, precisely because he’s a real patriot.

Not Mike. Mike Lindell has always been a true Christian and conservative through thick and thin. When every other company was pressured by the left-wing media to stop advertising on Tucker Carlson, Mike Lindell kept his ads running. During the 2020 election and its disgusting aftermath, Mike stood by President Trump the whole way, even as the entire Republican establishment was abandoning him. He kept hunting for the truth about the 2020 election afterwards, no matter how much the media trashed him, and no matter how many companies threatened to stop carrying his product. For Mike Lindell, God and the truth always comes first.

The other day, Walmart announced it won’t be carrying Lindell’s products anymore, no doubt because of his politics. Honestly, the only surprise is that it took this long. Originally, Walmart was a success story much like Mike Lindell himself. Sam Walton was a Christian man who took a small general store and turned it into the largest retailer in America. But Walton has been dead for thirty years, and the company itself is destroying the country that made its growth possible. Walmart’s CEO has endorsed BLM and called for sweeping gun control laws. He stopped selling pistols in their stores, and then stopped selling the ammunition for them too. But hey, Walmart has a reason to love tyranny: Their entire business model depends on China’s Communist dictatorship, manufacturing cheap crap to send to this country. All of those are good reasons not to shop at Walmart when you can avoid it. 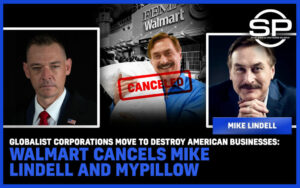