Why Does Your Doctor Want To Keep You Masked?

Why Does Your Doctor Want To Keep You Masked?

There follows a guest post by Paul Stevens, who is part of the Smile Free campaign to end forced masking in the U.K., which is currently inviting signatures to its open letter to the NHS Chief Executives to remove the mask requirement from healthcare settings.

Walk into your General Practitioner surgery and what will you see? Notices demanding that you ‘wear a mask’ and people with ill-fitting face coverings, most of which having been frequently touched, reused, rarely washed and improperly stored.

By contrast, in public spaces such as hospitality venues, retail settings and transportation hubs, you’ll find a lack of signage and a marked reduction in mask-wearing. More and more, people aren’t wearing them.

It’s as if we are living in two worlds: one where we have begun to return to a rational unmasked normality; and one, in healthcare settings including GP surgeries, where we are instructed to remain featureless and compliant with the facemask diktats of nameless NHS bureaucrats.

To understand how, and why, these worlds co-exist we need to start by looking at the frame of reference within which GPs operate. As independent contractors, for all intents and purposes GPs work within the NHS; and many are members of a single body, the British Medical Association (BMA). The NHS and BMA, one guiding and enabling the other, have played major parts in establishing and maintaining masking within healthcare settings.

The NHS has been a major advocate of masking and, as published on the Government’s “COVID-19: Infection prevention and control” (IPC) webpages, its current guidance for mask-wearing within health and care settings remains that facemasks for staff and facemasks or coverings for all patients and visitors are “recommended”.

However, having made masks a recommendation – not a requirement – the Government’s website fails to establish the legal standing of the instructions and their enforceability. All that is written is simply ‘guidance’, defined by the OED as “advice or information aimed at resolving a problem or difficulty”. There is no statutory weight that compels compliance with this guidance.

As with the Health and Safety Executive’s Approved Codes of Practice, following the guidance is not compulsory and there is freedom to choose other courses of action. The IPC pages frequently contain the word ‘should’ rather than ‘must’. So: “Universal masking with face coverings or surgical masks … should continue to be applied for all staff, patients and visitors.” In effect, this guidance appears at most to be ‘soft law’, being a ‘best practice’ suggestion, but not a matter of mandatory conformity.

As for implementation, responsibility lies with the CEOs of the various health organisations, for example the NHS trusts, and the IPC pages define a series of measures, such as risk reviews, which these individuals are to ensure happen within their organisations. None of these explicitly reference the need for patient mask-wearing and, ultimately, the IPC pages state that “Organisations are responsible for ensuring safe systems of work” and they may “adopt practices that differ from those recommended/stated in the national guidance”. So long as an organisation completes an assessment of the hazards associated with respiratory infectious agents, it is free to implement its own set of controls.

In short, within the Government’s infection prevention and controls protocols, nowhere does it say that a patient or visitor must wear a face mask or covering and is legally compelled to do so.

Since March 2020, the BMA has been an enthusiastic cheerleader for Non-Pharmaceutical Interventions (NPIs). From masks, lockdowns and social distancing to vaccine passports, the BMA hasn’t come across a restrictive measure it hasn’t fallen in love with. And in this regard, the doctors’ union seems to have acted no differently to other workers’ representative organisations in the public employment domain. For example:

None of these admonishments and cries for action in favour of masking was backed by hard scientific evidence.

By contrast, business owners and leaders in the private sectors of hospitality and retail were loudly outspoken about the harm the NPIs did. For example:

So why the differences between public and private workers? Perhaps economic impact upon workers during the coronapanic has been a significant factor. In the public sector, employment, and therefore renumeration, was guaranteed. People paid taxpayers pounds by the state did not suffer because of the Government’s measures. In fact, if we consider their working arrangements, with the switch to virtual consultations via telephone and digital, and many services rationed or even withdrawn, there’s an argument to be made, albeit an unpopular one, that GPs, in terms of their workload, did rather well. In contrast, the private sector, especially in hospitality and retail and amongst smaller enterprises, experienced enormous contractions, leading to loss of income, jobs and even closures of businesses. It can’t be surprising that, from a position of self-interest, GPs are more positive about NPIs.

And perhaps GP support for NPIs in general, and masks in particular, stems from insights concerning the efficacy of face coverings in helping protect from SARS-CoV-2? But no: the overwhelming evidence, for example here, here, here, here, here, here and here shows that masks don’t work.

Or maybe, the places GPs work are different, with people attending surgeries being ill with the COVID-19 disease? This idea fails to hold water. Thanks to their policy of reducing in-person consultations by over half at the ‘height of the pandemic’, GPs have simply not been seeing that many sick people. In fact, if you have ‘symptoms of coronavirus’ you are still, two years on from the start of this panicdemic, told in your GP’s recorded voice message “not to attend the surgery”. Then again, it may be the case that GPs are worried about asymptomatic patients, spreading the deadly virus unknowingly, to which we can say, “Nice try”: the scientific evidence for widespread asymptomatic spread is paltry. Credible hard data, for example this and this, indicate that it would be incorrect to believe that there is a persuasive case for asymptomatic transmission driving the spread. In fact, back in June 2020, the head of the WHO’s emerging diseases unit told a press conference that, “From the data we have, it still seems to be rare that an asymptomatic person actually transmits onward to a secondary individual. Very rare.”

This leaves us with only three other possible reasons for the health industry, and especially General Practitioners, to be so enthusiastic about facemasks.

Firstly, by failing to do their own research they have succumbed to the coronapanic fear and as a matter of faith accept what they have been told about mask effectiveness: in short, against all the evidence to the contrary, the average GP, who has an above-average intelligence, believe masks actually work against the SARS-CoV-2 virus.

Secondly, they have come to relish the additional ‘responsibility’, a.k.a. ‘authority’, over their patients that these ‘mandates’ afford them: playing the role of well-intentioned saviours of the hoi polloi just feels good. The irony, of course, is that these doctors are now addicts. They don’t want to give up their masks and nor are they going to let you give up yours.

Third, they might argue that, yes, they know the masks don’t really work, but if it reassures the patients, what harm is there? Apart from being patronising, from a psychological perspective that approach is flat out wrong: as Dr. Gary Sidley argues, persisting with face coverings will actually only “prolong, rather than lessen people’s anxieties”. (If you don’t believe Dr. Sidley, check out the mask clingers in Australia as they take baby steps towards alleviating the coronapanic.) Bottom line, as shown by the Danish mask study and the only other mask RCT conducted during the coronapanic – the one in Bangladesh (which continues to be exposed as junk science), deliberately or otherwise, doctors are ignoring the evidence that masks have little or no positive benefit to the wearer or to others.

And what of the leadership of the GPs? What have those who have been chosen to represent them within the BMA done to get their members to this point? Since March 2020, the health industry has engaged in a steady escalation of restrictions. In mid-January, despite the Government’s announcement that masks would “no longer be mandatory in public places”, we find NHS England stating that they should continue to be worn in GP surgeries, but that it was sufficient only to “encourage people to wear a face mask”. However, in an astonishing escalation from the BMA’s own COVID-19 toolkit, the GP Committee then stepped in and upped the ante, telling GPs that they could tell reluctant patients that “the law imposes on me the duty to expect you to wear a mask and on you the duty to wear one in these premises”.

Whatever is really going on here, it seems that the BMA and some of its key representative committees are striving deliberately to maintain the coronapanic and these GPs are operating according to the ‘sunk cost’ paradigm: they simply cannot face the facts and accept that they have imposed unnecessary and restrictive measures on those who use their services and, in effect, help pay their wages.

As with so much of the coronapanic nonsense, we need to remember that the problem starts with the Government and its guidance, which has been contradictory, inconsistent and, contrary to their hollow claims, highly unscientific. Until the authorities in the form of the Government, the NHS and the BMA and its various committees removes special treatment of COVID-19 in all matters and stops making it a special case, in effect treating it as being of no special social concern, people will have licence to retain constraints and take special actions. 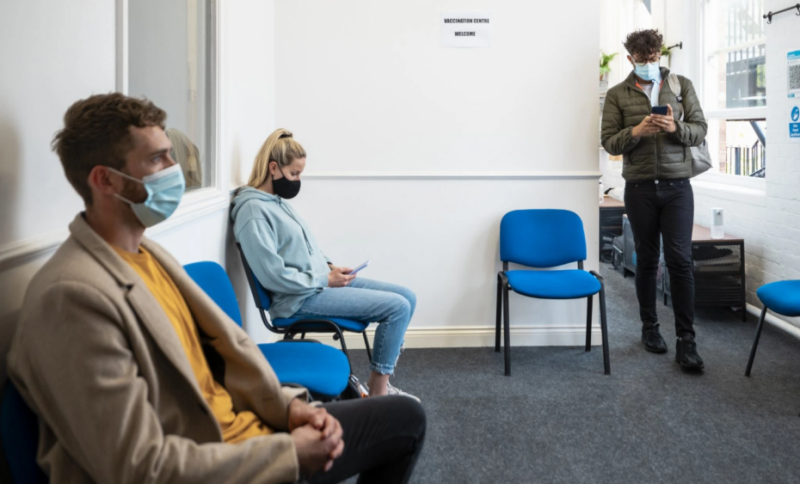 PrevPreviousThe Collapse of UST and LUNA Was Devastating, but There Is Still Hope for Crypto
NextFirst Mover Asia: Metaverse ETFs Are Underperforming Gaming ETFs; Cryptos Return to the RedNext