No Jab, No Job, No BS-19 Vaxxination, No Way, Organized by Nathan Buckley

No Jab, No Job, No BS-19 Vaxxination, No Way, Organized by Nathan Buckley 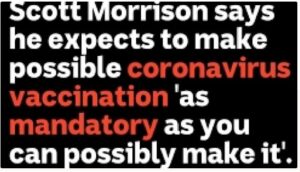 As expected from the very beginning of this campaign, on 3 August 2021, the Department of Health issued a document stating the following:

“It is at the discretion of States and Territories to determine the scope of RACF workforce and exemptions within their jurisdictions to give effect to the National Cabinet decision. As much as possible, these directions will be aligned to ensure consistency across state borders.

States and Territories are finalising public health orders, or alternative state-based mechanisms, and are encouraged to share these drafts with the sector. We expect these directions to be finalised in the coming weeks and released ahead of the implementation of mandatory vaccination from mid-September.”

It doesn’t get any clearer than that ladies and gentleman.

Enough is enough. It’s time to tell the State and Commonwealth Governments NO WAY to any mandatory COVID-19 vaccination.

Last year, each of the State Governments introduced legislation which compelled aged care workers to have flu vaccinations.  That was the test run.

In the coming days and weeks, they will try and force and or coerce people to have a COVID-19 vaccination.

Scomo announced on 19 August 2020 that he intends to make it mandatory for all Australians to have the COVID-19 vaccination.

This is in breach of various provisions of the Disability Discrimination Act 1992 (Cth) and section 51(xxiiiA) of the Commonwealth of Australia Constitution Act. Section 51(xxiiiA) was introduced into the Constitution to provide that whilst the Commonwealth Parliament can validly make laws with respect to the provision of benefits and for medical services, it is not authorised to make laws providing for the complete control of medical services rendered by any person to any other person. Nor does the Commonwealth legislature have the power to control the practice of the medical profession completely or to such less extent as Parliament might think proper.

“The term ‘civil conscription’ is wider than industrial conscription. It is applicable in the case of any civilian service, i.e. non-military, work or service. It could properly be applied to any compulsion of law requiring that men should engage in a particular occupation, perform particular work, or perform work in a particular way.”

He also alluded to European history before and during World War II saying:

“There could in my opinion be no more effective means of compulsion than is to be found in a legal provision that unless a person acts in a particular way he shall not be allowed to earn his living in the way, and possibly in the only way, in which he is qualified to earn a living.”

Latham CJ stressed the importance of this and said that any service to which the limitation applied should be completely voluntary and not procured by compulsion of law. The constitutional objective was to safeguard the right to be free from governmental interference in making choices about one’s health care. This is a fundamental civil right.

That important decision confirmed the fundamental right of Australian citizens to determine by their own will whether they should take any medical or pharmaceutical benefit provided. Accordingly, any legislation that requires medical practitioners to prescribe government-mandated medical services constitutes a form of civil conscription that is constitutionally invalid.

In this sense, Chief Justice Latham argued in the British Medical Association case that civil conscription would include not only legal compulsion to engage in particular conduct but also the imposition by government of a medical duty to perform a service in any particular way. Constitutional limits on legislation which does not acknowledge this important guarantee were more recently acknowledged in Wong v Commonwealth; Selim v Professional Services Review Committee (2009) 236 CLR 573. In this particular ruling the High Court restricted the capacity of both Federal and State governments to implement mandatory vaccination, even recommendations from the National Health directives for either Federal or State governments.

Of course, in the Wong v Commonwealth; Selim v Professional Services Review Committee case, the Court was simply following precedent as per the previous 1949 decision which had already clarified the issue. Accordingly, Chief Justice French and Justice Gummow held that civil conscription is a ‘compulsion or coercion in the legal and practical sense, to carry out work or provide services’.

Importantly, the High Court also indicated that the prohibition of civil conscription must be construed widely, to invalidate any law requiring medical practitioners (expressly or by practical compulsion) to work for the Commonwealth Government or any Australian State. Simply put, no law in this country can compel any medical service on behalf of the Australian government.

As can be seen, section 51 (xxiiiA) maintains the prohibition of vaccination through any form of government-run health service, indicating that vaccination should only be through voluntary means in accordance with the free communications between medical doctor and patient, which is essential to achieve a high-quality healthcare.

In addition to this, it is accepted that under section 51(ix) of the Constitution, the Commonwealth Government has the power to make laws with respect to quarantine. Indeed, in a rare discussion of the quarantine power, Latham CJ held in obiter that the power would not support a Commonwealth law requiring citizens of the states to submit to vaccination or immunisation (Attorney-General (Vict) v The Commonwealth (“Pharmaceutical Benefits Case”) (1945) 71 CLR 237 at 257):

Quarantine matters fall within the exclusive powers of the Commonwealth. Not the States. The States have no power to pass laws mandating any form of vaccination. To do so would be beyond their powers.

To conclude: the Australian Constitution explicitly prohibits any form of legal compulsion upon the medical profession to carry out any form of medication, including vaccination. In fact, no Government, either Federal or State, can impose compulsory vaccination in this country, or prevent medical practitioners from remaining entirely free to choose whether or not to provide certain medical services, including vaccination. As Justice Webb emphasised: “If Parliament cannot lawfully do this directly by legal means it cannot lawfully do it indirectly by creating a situation, as distinct from merely taking advantage of one, in which the individual is left no real choice but compliance”. The situation here is the National Cabinet and its decision. Applying Justice Webb’s analysis, the Commonwealth Government cannot implement any mandatory vaccination scheme indirectly by creating a situation, i.e. establishing a National Cabinet and using that to direct the States to implement the Commonwealth’s demands, in which the individual person is left with no real choice but compliance (fear of losing their job, their livelihood, their career).

This means that the State and Commonwealth Governments are unable to introduce any laws that compel individuals to have a flu shot or any mandatory COVID-19 vaccination. Any laws that try to do that are unlawful and should be struck out.

It also means that the State and Commonwealth Governments are unable to enforce any laws that purport to say that a person is unable to be employed or work in a particular industry or refrain from entering into a particular premises for failing to have a flu shot or COVID-19 vaccination.

All funds raised will go towards the legal battle ahead. Nathan Buckley, the promoter of this campaign is a lawyer and Partner of G&B Lawyers, a Sydney city based law firm who believes in the protection of fundamental freedoms for all Australians. Nathan is an experienced litigator and is admitted to the roll of practitioners on the High Court of Australia.

The target is large so as to cover our team’s legal costs. As we now have a number of matters in the Fair Work Commission jurisdiction that may result in test cases specifically within the scope of this campaign, all donations will be used to pay legal costs and disbursements towards any such matter which may become a test case in either the Federal Circuit Court or the Federal Court. Accordingly, there is no functionality to issue any refunds.  Updates on the progress of each test case will be provided as the matters progress.