This is based on the submission by Dr. Wiseman and colleagues to CDC, which has since been posted.

“To think we’re going to boost our way out of this – is preposterous.” Dr David Wiseman

I had the fortunate opportunity of interviewing Dr. David Wiseman, a Ph.D. research Bioscientist, former Johnson & Johnson clinical trial head-researcher, and journal peer reviewer. Dr. Wiseman and a small team of dedicated colleagues have masterfully compiled a series of slides analyzing the data from Israel, the UK, Denmark, and Canada for the Pfizer-BioNTech Covid vaccine comparing vaccine effectiveness of the primary series of vaccination (dose 1 and 2) with the booster. What he revealed in his analysis of the data was highly alarming and raised many red flags of negative vaccine efficacy and its implications- where the vaccines are doing more harm than good.

From the onset of the interview, Wiseman used the term ‘quasi-vaccine’ to describe the Pfizer-BioNTech vaccine and Moderna vaccine. “It’s like a vaccine- in that it promotes an immune response but it’s not your conventional type. They meet the FDA’s definition of a gene-therapy product even Moderna’s own filings have classified it as such.”  Wiseman went on to explain how the messenger (m)RNA is not the normal type that would exist in your body but has been genetically modified. The correct term is ‘nucleoside-modified mRNA’, which is used within FDA’s own documents.

He drew attention to a Bayer executive, Stefan Oelrich, president of the pharmaceutical division, who told a group of international experts at the World Health Summit in Berlin last October that the mRNA-based novel vaccines were “ examples of cell and gene therapy.” He stated, “if we had surveyed two years ago in the public – ‘would you be willing to take a gene or cell therapy and inject it into your body?’ – we probably would have had a 95% refusal rate.”

The toxicological consequences of these type of gene therapy products were written about in an article in Nature by the president/founder of BioNTech, himself, Dr. Ugur Sahin.

The role of ACIP, FDA and CDC

Wiseman gave an informative breakdown of the two main US regulatory agencies: the FDA and the CDC. The FDA approve/authorise medical products for sale or distribution after determining their safety and efficacy. The CDC then make recommendations on how the product should be used after the FDA’s approval. ACIP (Advisory Committee on Immunization Practices) are made of independent doctors and scientists who render their opinion as to what both these agencies should do. Their findings are not legally binding and the FDA and CDC can choose to disagree or not even ask for their opinion.

Last week’s CDC meeting came on the heels of the FDA’s emergency use authorization of the Pfizer-BioNTech vaccine booster dose for 12 -15 year olds and the reduction in the window of time for boosting from 6 months to 5 months on January 3, 2022. The FDA issued their EUA without consulting their advisory committee on vaccines, Vaccines and Related Biological Products Advisory Committee (VRBPAC). The CDC presented a series of slides to ACIP and posed the question: “Should 12–15-year-olds receive the Pfizer-BioNTech covid vaccine booster dose at least 5 months after completion of the primary series- based on balance of benefits and risks?”

Major problems with the meeting

The lack of transparency in the actions of the CDC and FDA has been a common feature throughout the pandemic. Wiseman was critical of the fact that key data being presented was not on the agenda or posted on their official website- in this case it was the critical data from Israel. He commented on the fact that the ACIP members appeared tired and despondent, probably because they had been routinely asked to review voluminous amounts of data in short time periods. Wiseman also picked up on the element of confusion in the meeting, “They seemed confused in what they were expecting from the vaccines: to reduce infections or hospitalizations? – and they were arguing about it.”

An interesting component of the meeting was whenever the subject of the implication of their decision on vaccine mandates was brought up by the ACIP members, the CDC and FDA members, who were both present, chimed, “that’s not your problem- you just have to deal with the science.” This gave Wiseman the opinion that the entire meeting appeared to be stage-managed since that discussion was strictly off-limits.

Wiseman pointed out the selection of the public comment speakers did not appear to be random. Only five speakers were selected to speak in a time period (30) minutes that could have accommodated 8 or 9. In addition to himself, Wiseman knew of three others who requested to speak but were also rejected.

The manipulated and the missing data

I will not attempt to summarize all the slides and corresponding data that Dr. Wiseman discussed during the interview- it’s important to watch it for yourself. However, there are key few things that stood out. Wiseman produced a slide that was shown in the CDC meeting that originated from the UK’s Health Security Agency (formerly named Public Health England). It was titled ‘Pfizer mRNA vaccine effectiveness (VE) against infections with Delta and Omicron variants, United Kingdom.’

Immediately, you can see how vaccine effectiveness had significantly waned in its usefulness against the Omicron variant compared to the Delta.

From simply looking at the second panel which showed the VE of the booster, you would assume there was a significant improvement from the second dose’s effectiveness against the Omicron variant- bolstering the argument for the booster. However, looks can be deceiving, particularly when it comes to government data. Wiseman, highlighted evidence of data manipulation- the second panel was plotted on an expanded scale compared to the first panel. If you were to plot the VE of the booster using the same scale (which Wiseman did), it suggested a similar downward trajectory to the primary series. You will also note that the vertical – y – axis – encompasses a wider range of values that is needed. This has the effect of de-emphasizing the downward trajectory of the quasi-waning. Although this slide was taken directly from the UK report, the CDC should have picked this up before presenting the data to ACIP.

Data from Denmark and Canada showing negative VE was not presented in the meeting.

Dr. Wiseman pointed out the key fact that the data from Denmark and Canada which showed significant rates of negative vaccine effectiveness were omitted from the presentation- even though the studies were all available in pre-print. In the data from Denmark, Pfizer’s VE was a shocking -76.5 % just three months after the second dose against the Omicron variant compared to 53.8% against the Delta.

“This critical data was not posted to the CDC’s website ahead of schedule but was only shown in the meeting- this again speaks to the major transparency problem” complained Dr. Wiseman. He went on to state that this data was announced by Dr. Peter Marks, director of the Center for Biologics Evaluation and Research within the FDA, who was present at the meeting, as being the main driver in the FDA’s decision to authorize the booster for 12–15-year-olds. Looking at the data, Israeli numbers on myocarditis cases were much higher than the CDC’s data (coming from VAERS, which is notoriously under-reported), about 2-10x greater. What was very apparent was the jump in cases of myocarditis for males after the second dose particularly in the 16-17 age group, both in the Israeli and the CDC data.

Wiseman pointed out a particular slide that was presented, which was glossed over very quickly at the October FDA meeting. He commented how unusual it was to see severe cases amongst the vaccinated (the green line) go up more quickly before the black line (the unvaccinated)- if this was the pandemic of the unvaccinated, you’d expect to see it the other way round. He then went to say that the green line was a composite of the old and recently vaccinated and when he came to split them out- a different picture emerged. Non-recent vaccinees developed Covid more quickly, at least as much as the non-vaccinated and by six months there appears to be no benefit of vaccination. “This was known weeks ago,” Wiseman reiterated, “we sent this to the FDA both in oral and written comments but we had no response back.”

The data shown in the slide was when the predominant strain was the Delta variant. The key point worth noting is that the vaccine effectiveness at its best was just 49% within the first two months, even though Pfizer at the time was flouting a figure of VE in the 90s. After 3-4 months it dropped to 25% and then fell to -6% after only 5-6 months. The booster VE did jump to 64% but Wiseman complained that the full study report is missing to really dissect the data. Also, the data of it waning after time is not being shown. Wiseman again emphasized the point that the data does not get to be seen until last minute and that the FDA made their decision without consulting with VRBPAC.

“I think this will allow us to whack a mole for another month or two but this is not sustainable” Dr. Sarah Long

On a final note, Dr. Wiseman highlighted who he thought was an insightful member of the committee and who clearly showed growing frustration with the situation. Dr. Long asserted that this was a vaccine to protect against hospitalization and death, not “runny noses.” She seemed to be ‘raising the alarm’ in noting that the data presented from Israel was only looking at the infection rate, not hospitalization and death. Wiseman pointed out that her comment that “children are affected in large numbers” was likely based on still incomplete data. Her comments on ‘playing whack a mole’ with these new variants was also very telling as it speaks to the apparent futility of the vaccines. Dr. Long’s final comment that it would be “the last whack a mole” and “it’s not smart to think that we have to continue to boost to prevent infection or mildly symptomatic infection,” emphasizes her recognition that the boosting programme “is not sustainable.” 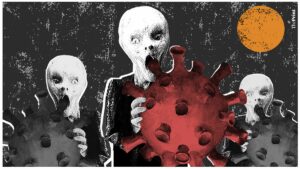