By The Alex Jones Show

Alex Jones breaks down the video of Dr. Roger Hodkinson calling out his fellow medical professionals for being complicit in state-sponsored murder for their medical tyranny Covid response. 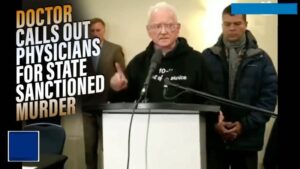 MMLinwut
Also don’t get lost on the government sanctions of the killing, it is criminal and yes we cannot allow it to continue, but he lays it out straight the colleges and a lot of hospitals were coconspirators, also those governments at least most of them did not start this mess but did criminally encourage it. The one’s whom actually directed the ruination from the killer injections, the money grabbing from the dead, the rigging the elections, the smaller stoppable group(s) causing this operation crossfire hurricane like mess… Their panic is a large part of the problem it’s keeping them cognitively dissonant. A trauma, or fear based response, that’s why the Stockholm syndrome based mind control attacks people have been overcoming for 3000 years have been so hard to overcome.

Pilati
Surly anyone in the world without God is lead to lustful things, and is carnal in nature hates that which is good, because that person isn’t good. His or her minds are dark and filled with things that aren’t even worthy of being in the sewers. You want the world to be a sewer and it can be without God. But God will not allow you to remain in your sins forever that is why He sent His son. The devil wants men to believe at the end of mortality there is only death and darkness so why not follow Lucifer, he will show you some light in the darkness.. No when you die your body and spirit are separated, your body returns to dust in its rest but your spirit will go into either spirit paradise or spirit prison. That’s why people are allowed to speak with the dead because we wait here on earth in spirit until the day of resurrection. Your spirit and body will be reunited in perfection to never die again. In Adam all men will die, as in Christ all men will be restored to life. And there is more. Surly your heart WILL fail you if you have no faith in God.

Pilati
If God were not real you would not be. Truth is the knowledge of things as they are, and as they were, and as they are to come. And whatsoever is more or less then this is the spirit of that wicked one who was a liar from the beginning.

FRE1DOMorDE4TH
Its time to go medieval on these people who are pushing this poison jabs and killing our people all in the name of the mighty dollar.

EyesWideShut2021
Extremely powerful for the Freedom Convoy to include these top notch Doctors. Kudos Doc’s! FREEDOM!

Pats Maballs
these crackpot politicians and media that has to sow division at every point in time are making us all insane.. i feel like im going insane…