Chinese-Israeli Humpty Dumpty Institute Along for the Ride.

Foro de Sao Paulo, known as “Foro” for short, was “Co-Founded” by Lula and Castro in 1990. In addition to its close ties to left-wing tyrants and mass-murdering dictators, the Foro is linked to narcotics trafficking on an industrial scale.

A problem that’s long plagued Central and South America, drug trafficking has often persisted with the aid of those at the top of the global political power structure.

The same stories show the close ties between the Foro, Lula Da Silva, and FARC; the drug-trafficking communist terror group running its militant campaign out of the Colombian jungle.

In addition to FARC, the Foro is tied to Paraguay’s FARC-backed “EPP“ which has alleged, proximal links to Soros Real Estate and Soros’ “regional partners“.

Even the “esteemed” Mi6-linked, and increasingly Orwellian British Broadcasting Corporation (BBC), has described the links between the Foro and genocidal narco-traffickers in its Portuguese language publication.

For decades, Lula has described the deep, emotional bond that he held with the late Cuban dictator and mass-murdering communist Fidel Castro, with whom he co-founded the Foro.

At the pair’s Foro, the Brazilian communist has gathered with the likes of Venezuela’s Nicolas Maduro and Hugo Chavez, Argentina’s Kristina Kirchner, Bolivia’s Evo Morales, and the rest of the Castro clan, to plot out the advancement of their left-wing agenda.

Even a communist Catholic Bishop who promotes a “liberation theology” and is on record defending pedophilia is among the Foro’s cohort.

Academics and defense officials have described the Foro as an existential threat to the Western World. 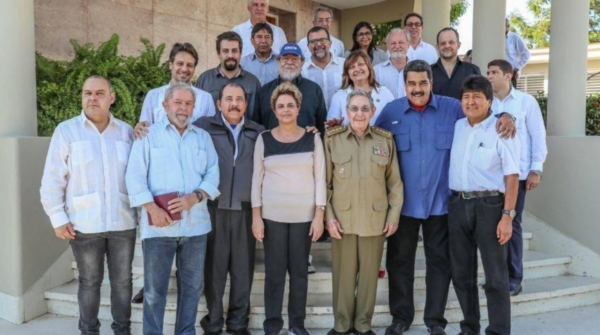 Lula poses with a who’s who of communist brutes in a Foro group photo.

Lula’s Foro operates with the full endorsement of the Chinese Communist Party and Xi Jingping’s Central Committee, which sent a letter to express their approval of the Foro and its mission. Emblazoned with the letter,  was the infamously communist hammer and sickle symbolism. 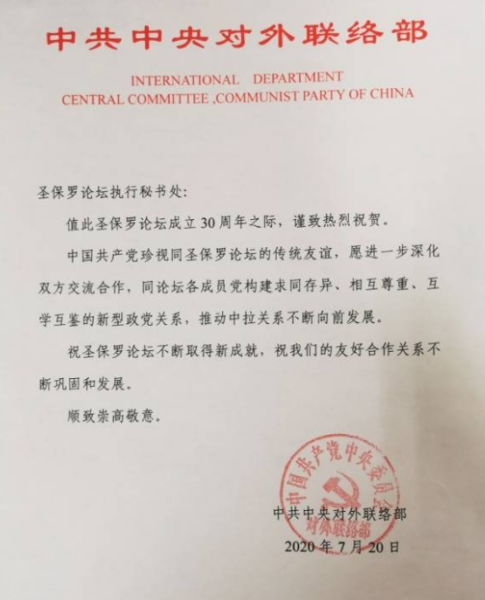 A congratulatory letter that was sent to Lula’s Foro – On official CCP letterhead.

The CCP doesn’t just figure prominently into the Foro and its continued influence on South American politics, but directly into the contested electronic election in Brazil, which saw corruption convict Lula “elected” President.

Much like their parent group, the CCP, the Chinese Communist Party’s numerous influence operations have extended their tentacles deep into Brazil.

As National File exposed in recent reporting, the Epstein-directed, CCP/PLA-partnered Humpty Dumpty Institute, alongside the World Economic Forum, have long sought to exert their will upon Brazil, which has been seen as a massive political prize in the Western World by Maoist and Marxist communists.

The Foro and its dirty dealings have been shielded from the fawning media coverage surrounding Lula’s “win” in Brazil, where votes deemed “invalid” by election bosses outnumber the reported margin of victory by millions.

So deep are Lula’s ties to the globalist world order, that the corporate press and even ex-U.S. President Barack Hussein Obama have hailed him as the most popular man in the world.

His Vice President-elect, Geraldo Alckmin, was once bizarrely described by Bloomberg as “Brazil’s Hillary Clinton,” and is himself a close associate of the World Economic Forum’s Klaus Schwab.

Intriguingly, Foro’s website was deleted once National File, the first on the beat inside the United States, began asking questions, and issuing reports on the communist takeover of Brazil.

The Foro’s Twitter profile remains online, for now, and describes it as “a meeting of progressive and leftist political parties in Latin America and the Caribbean,” putting a new-age vocabulary spin on the old idea of global communism. 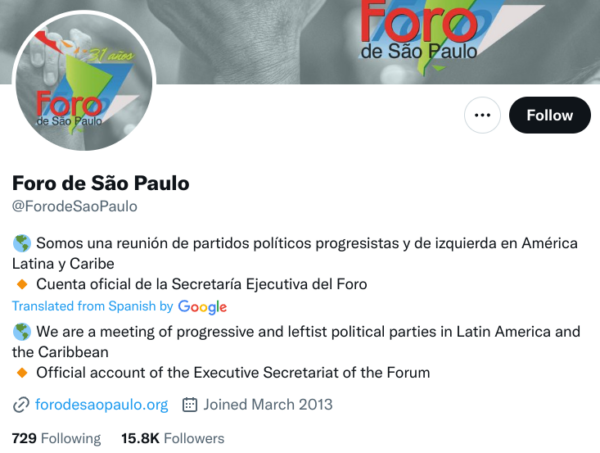 The Foro’s Twitter page attempts to soften its origins in hardcore, genocidal communism. 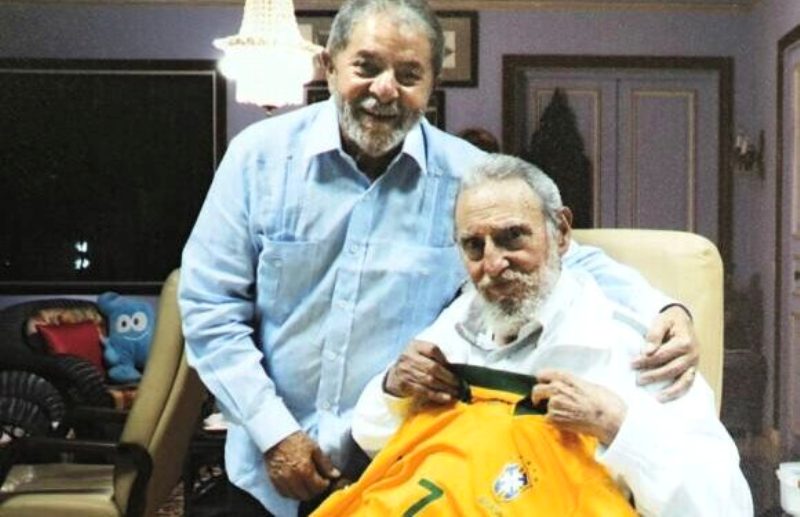 PrevPreviousOne Way or Another, The Population of the Globe will Soon be Much Smaller than it is Right Now
NextElon Musk Sends an Email to Twitter Employees Overnight, Essentially Saying “Get Ready for Extremely Hardcore work or be Fired”Next