Incoming: The biggest market collapse and rush to the exits that anyone has ever witnessed.

Incoming: The biggest market collapse and rush to the exits that anyone has ever witnessed.

The information dam is breaking on the monstrous “vaccines”. When one looks in the otherworld (the part which is not controlled by Big Tech monopolies) of the internet like Bitchute and all the other alternate media platforms, the talk is all about the “vaccines” and the horrible things they are doing to people particularly women whether they have been jabbed or not. This information is starting to bubble through the highly protected mainstream propaganda guardians such as Facebook, You Tube, all of network news and newspapers, all of government sources at all levels. Yes, cracks are appearing.

And at major inflection points, a crack can burst into a torrential flood in a flash. I propose we are reaching one of those points very soon and it will likely coincide with the biggest market collapse and rush to the exits that anyone has ever witnessed.

One of the more disturbing things is the reports on female (and male) reproductive systems and the tremendous harm these contagious shots are doing.  It is no longer hard to convince anyone that the goal was world depopulation all along when so many are harmed all over the world in exactly that way.

I repeat: When the “vaccines” are permanently halted due to the truth coming out in a big way, those who have been pimping these things non-stop is in for the most tremendous backlash ever.  And that’s pretty much every institution worldwide, every major media outlet, every politician, and every corporation, business and even the churches.

The CDC’s VAERS website is likely NOT publishing data in a timely matter at all. We may be seeing only 10 -15% of what is and was actually reported. There is a myriad of very smart bloggers who track this data every week and show convincingly that the CDC is sitting on a TON of reports.  This video demonstrates this very easily. Regardless, deaths went up 581 in the update last Friday.

There very well could be 20K+ deaths in the U.S. system alone.  Vioxx probably killed 30K+  before it was finally pulled from the market but Vioxx wasn’t being shoved down everyone’s throats worldwide in only a matter of months.

So again, what we have here is the perfect storm. You cannot hide the deaths, the injuries, and the impact these are having on so many people for much longer. Vaccine hesitancy is not only here, but it is likely to turn into vaccine anger on a scale unfathomable to the stupid pricks who thought this was a good idea pumping experimental shots in the entire world.

You can censor the internet and media all you can (and they have been tremendously successful), but word of mouth – and the alternate media of the internet – still exists.  I have never linked to Alex Jones, but he is raising hell about the issue so I’ll give him credit as he is still a thorn in the side of the media “gatekeepers.”

We are just waiting for the spark to light the fire.

Again, I ask you, what will happen when the market realizes the experimental shots (now 1.3 Billion served! – so they say) was the biggest mistake in human history as I have been saying all along?

You have your financial collapse catalyst staring you in the face.  They jabbed 1/7th of the world and the results are not pretty. The 1/7th is starting to warn the other 6/7th that it was all a huge mistake. Its still in the trickle stage, but that should change before the month of May is over.  The next many weeks will be the “struggle” between the jabbed vs. the unjabbed and I do not underestimate the forces of evil. There is too much invested for them to relinquish so easily. Regardless, I am confident the market (and the human race for that matter!) will figure it out anyway no matter how much the propaganda continues.

The shots are not even proving effective to what they told us was their main purpose; to keep people out of the hospital.

The greatest greedy, lying, evil scam ever will be the peak of Grand Supercycle wave III.  It is only fitting. We have peaked on the “good news” of the “vaccines” as a worldwide savior but that very lie will soon launch the great collapse. It makes for a good dystopian movie or fiction novel. Except it’s not. It is really happening.

And if its true that those who got the shots will start having serious afflictions of all kinds within 2 years at a major rate, then reality is not going to be good at all.  Imagine if the serious affliction rate was “only” 25%…that’s some 350 million already doomed to suffer. And we are still jabbing at a furious rate so that will be higher. Even at only a 10% serious affliction outcome rate is an astounding number of people and most of them are our neighbors and co-workers because the Western world just begged for these things by praying at the alter of Big Medicine.

I mentioned in Friday’s update that the DJIA did not quite “finish” its count and that it could see a spike higher with the Wilshire 5000 not following. Well the DJIA did not quite make a new peak, but it came close. Perhaps a pop tomorrow? That would finish its pattern perfectly and set up a major non-confirmation perhaps.

And yes the Wilshire surged this morning and faded. DJIA up 0.7%, Composite down 0.5%. 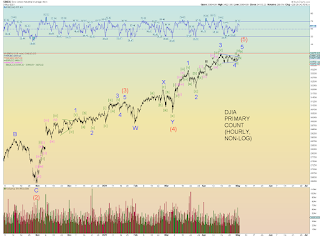 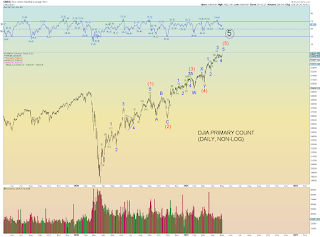 Wilshire is missing intraday data. Top alternate is that the shitshow goes on for a bunch more weeks as the true Minor 4 of (5) has yet to bottom. Again the collapse is likely to coincide with the halting of the vaccines.  That is unpredictable but social mood should turn against before they are halted. I’m spitballing here out loud. 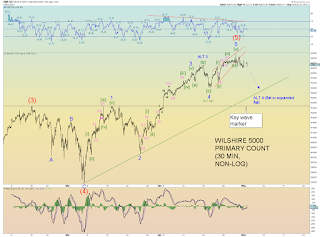 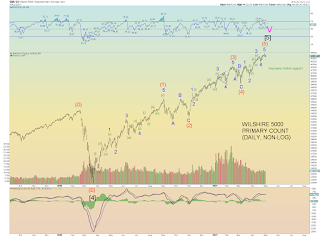 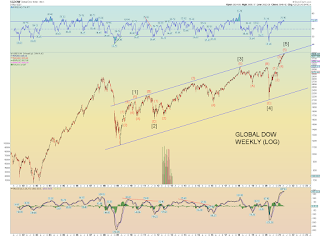 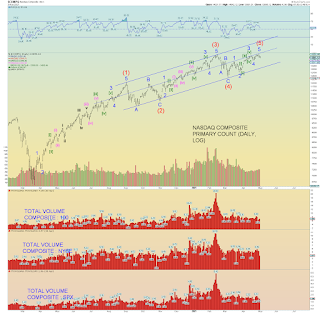 This is such an interesting chart. The market “mess” over the last 13 months makes perfect sense if viewed through the lens of an ending diagonal triangle wedge that has been squeezed and artificially elongated out of proportion due to unnatural computer-induced leverage. Yet the markers are still there for all to see.
The outcome of this would be a price collapse carrying prices to beneath where the wedge started – March 2020 low. 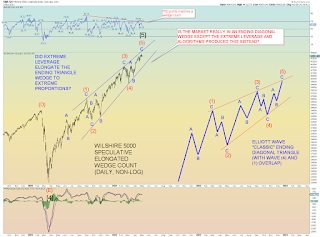