Global Economy in Freefall: China Manufacturing Orders Drop 40%. World Economy Heads for One of its Worst years in Three Decades

U.S. manufacturing orders from China down 40% in unrelenting demand collapse

Manufacturing orders from China down 40% in unrelenting demand collapse

– U.S. manufacturing orders in China are down 40% in what a logistics manager described to CNBC as an unrelenting demand collapse.
– Asia-based shipping firm HLS recently told clients it is a “very bad time for the shipping industry.”
– Chinese factories are shutting down two weeks earlier than usual ahead of Chinese New Year.
– As the Federal Reserve and other central banks around the world attempt to fight inflation by raising interest rates and cooling the economy, there is significant risk that a slowdown in demand turns into a recession.

U.S. logistic managers are bracing for delays in the delivery of goods from China in early January as a result of canceled sailings of container ships and rollovers of exports by ocean carriers.

Carriers have been executing on an active capacity management strategy by announcing more blank sailings and suspending services to balance supply with demand. “The unrelenting decline in container freight rates from Asia, caused by a collapse in demand, is compelling ocean carriers to blank more sailings than ever before as vessel utilization hits new lows,” said Joe Monaghan, CEO of Worldwide Logistics Group.

U.S. manufacturing orders in China are down 40 percent, according to the latest CNBC Supply Chain Heat Map data. As a result of the decrease in orders, Worldwide Logistics tells CNBC it is expecting Chinese factories to shut down two weeks earlier than usual for the Chinese Lunar New Year — Chinese New Year’s Eve falls on Jan. 21 next year. The seven days after the holiday are considered a national holiday.

“Many of the manufacturers will be closed in early January for the holiday, which is much earlier than last year,” Monaghan said.

Supply chain research firm Project44 tells CNBC that after reaching record-breaking levels of trade during the pandemic lockdowns, vessel TEU (twenty-foot equivalent unit) volume from China to the U.S. has significantly pulled back since the end of summer 2022 — including a decline of 21% in total vessel container volume between August and November.

Asia-based global shipping firm HLS warned clients in a recent communication about the ocean transport business climate.
″It seems to be a very bad time for the shipping industry. We have the combination of declining demands and overcapacity as new tonnage enters the market,” it wrote.
Central banks, including the Federal Reserve, are raising interest rates to cool demand, which helps to push down supply chain prices that had been at record levels. But monetary policy to fight inflation is walking a fine line as a supply-demand resetting can turn into a recession. More CEOs are citing the risk of recession, signs of a weaker consumer and slowing sales, and the market remains unconvinced the Fed can engineer lower inflation without forcing a “hard landing” on the economy.

HLS analysts are predicting a further 2.5% decline in container volumes and a nearly 5-6% increase in capacity in 2023, which will continue to negatively impact freight rates in 2023.

OL USA CEO Alan Baer tells CNBC that there are some early signs of an inventory correction. Overall business volume and order flow out of Asia continue to be muted as carriers cancel more vessels, and there is little upside momentum leading into Chinese New Year. But Baer said, “Space has already tightened, so while demand is soft, space may be at a premium in January and throughout Q1. On the plus side, inventory depletion and the need to restart the order and delivery cycle appears to be inching upward.”

HLS cited trade data showing that U.S. imports from Asia plunged in October to their lowest level in 20 months. The spot rate for a container from Asia to the U.S. West Coast has crossed the breakeven point, “with little room for further reductions,” it wrote.

Aerial view of containers sitting stacked at the Qinzhou Port on August 15, 2022 in Qinzhou, Guangxi Zhuang Autonomous Region of China.

The large West Coast ports of Los Angeles and Long Beach have experienced the largest drop in trade, according to Josh Brazil, vice president of supply chain insights at Project44, as shippers also rerouted some of their shipments to the East Coast to avoid the risk of a major union strike at West Coast ports.

The recent rise in Covid lockdowns in China continues to impact manufacturing operations and delay cargo outputs. There are also local access obstacles for cross-province and cross-city transportation, mostly related to truck driver testing requirements, with trucking capacity to be largely affected.

The fight for vessel space, the rollovers of cargo, and the slow trucking is tracked by the CNBC Supply Chain Heat Map.

Blank (canceled) sailings data shows the cut in vessel capacity on the transpacific route (China to the U.S.) continues at a significant pace. The 2M Alliance of Maersk and MSC has suspended almost half of its U.S. West Coast services for December. The Ocean Alliance (CMA CGM, Cosco Shipping, OOCL and Evergreen) and THE Alliance (Ocean Network Express, Hapag-Lloyd, HMM and Yang Ming Line) have cut overall vessel capacity by 40-50% up to Chinese New Year.
As a result, space for shippers is considered tight for cargo bound for the Pacific Southwest route and service reliability has declined, with carriers including MSC and Hapag-Lloyd rolling (not accepting) cargo on sailings in an effort to make up time. According to logistics managers, this is creating two weeks of delay. MSC said in its latest notice to clients, “ETAs are indicative and subject to change without prior notice.”
The drop in manufacturing orders from the U.S. and the E.U. is also impacting Vietnam, which has been booming as a manufacturing hub as more trade moved away from China.

Since early this year, 12,500 companies were closed per month, a 24.8% increase year over year, according to the Vietnam General Statistics Office report. The combination of the lack of manufacturing orders and loan interest rates increasing from 6.5% to 13.2% in Vietnam led many companies to close factories instead of signing new order contracts, according to HLS. Canceled ocean sailings bound for Vietnam are up 50% for December.

Unlike the decrease in orders out of China, trade data analyzed by Project44 indicates that the Europe-to-U.S. route is “one of the possibly most surprising and certainly most significant developments since early 2020,” Brazil said.

“This sharp rise cannot be explained by the pandemic alone. But a strategic shift from over-dependency on trade with China and geopolitical tensions over Russia are the main drivers of the EU-U.S. trade boom,” he said.

The global trading map is being rapidly redrawn, with EU-U.S. trade and investment in U.S. rising sharply as economic ties between the West and China are subjected to critical scrutiny. This year, the U.S. has imported more goods from Europe than China – a big shift from the 2010s, according to Project 44.

“For their part, Europe’s manufacturers battling sky-high energy prices and inflation are increasingly exporting to and investing in the U.S.,” Brazil said.

Stocks slumped amid gloomy economic warnings from bank chiefs at a time when concerns about the impacts of Federal Reserve policy on growth and corporate earnings are running rampant.

A rout in tech giants like Apple Inc. and Microsoft Corp. weighed heavily on the market, with the Nasdaq 100 down 2% and the S&P 500 suffering a fourth straight loss. All but two firms in the KBW Bank Index of financial heavyweights fell. As traders sought safety, the dollar rose with Treasuries.

Goldman Sachs Group Inc.’s David Solomon warned about pay and job cuts, citing “some bumpy times ahead.” Bank of America Corp. is slowing hiring as fewer employees leave ahead of a possible economic contraction, chief Brian Moynihan said. Morgan Stanley is embarking on a fresh round of job cuts, while JPMorgan Chase & Co.’s Jamie Dimon told CNBC a “mild to hard recession” may hit next year.

“We have not yet seen the bottom on equity prices,” said Lauren Goodwin, portfolio strategist at New York Life Investments. “While this phase of equity market volatility is likely to end in the next few months, earnings have not yet adapted to a recessionary environment.” 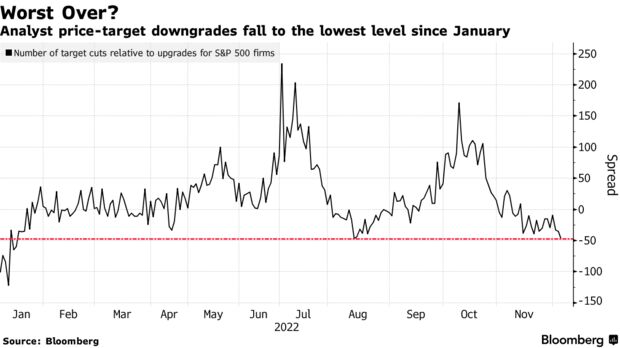 As shaky as markets look, one indicator looks solid: analysts’ view on the companies they cover.

After slashing their share-price targets over the summer at a pace seen only a handful of other times in history, they’re rolling back their skepticism and reducing the number of decreases relative to increases to a level last seen at the onset of the rout in January, data compiled by Bloomberg show.

To Katie Nixon at Northern Trust Wealth Management, the potential lack of earnings growth in 2023 may be a limiting factor to market performance amid the already elevated valuation level.

“Markets have never bottomed before a recession has begun,” said David Bailin, chief investment officer at Citi Global Wealth. “If there is in fact going to be a recession next year, if we are going to see a period of unemployment rising in the country, then we would expect that markets would have to settle down from where they are today over the course of the next several months.”

The world economy is facing one of its worst years in three decades as the energy shocks unleashed by the war in Ukraine continue to reverberate, according to Bloomberg Economics.

PrevPreviousIf You Ignore Every Economic Indicator and Just Look at Bank Stocks Like BAC, JPM and GS you can Clearly See there’s a Shift Happening Right Now
NextTrump Warn Americans To Prepare For A Depression: More Devastating Than Most People Expect – “What’s Coming Is WORSE Than A Recession”Next