He is board-certified in Virology and Microbiology, the author of over 30 publications, and inventor of a patent application for universal vaccines. He currently works as an independent vaccine research consultant.

“One could only think of very few other strategies to achieve the same level of efficiency in turning a relatively harmless virus into a bioweapon of mass destruction.”

Dr Bossche believes that vaccinologists, clinicians, and scientists are only focusing on short-term results at the individual level and not the consequences at the global population level, which he believes will soon become evident. Evident in the form of  having transformed “a quite harmless virus into an uncontrollable monster”.

For those needing a sweeping overview of our immunology, watch Ivor Cummins interview Creon Levit, Ep81 The Amazing Immunology of our Viral Issue – Incredible Science at Work! Many physicians would also benefit from watching this (note: the average physician receives exceptionally little training in immunology and virology). Those wishing to dig deeper into immunology in general, read for example, Roitt’s Essential Immunology, Thirteenth Edition.

Bossche states that the multiple emerging, “much more infectious” viral variants, are already examples of “immune escape” from our ‘innate immunity’, and were most-likely created by the government interventions themselves; the so-called Non-Pharmacological Interventions (NPIs) – i.e. lockdowns and cloth facial coverings. Unofficially, but also more aptly known as the Non-Scientific Interventions.

He claims his beliefs are basic principles taught in a student’s first vaccinology class – “One shouldn’t use a prophylactic vaccine in populations exposed to high infectious pressure (which is now certainly the case as multiple highly infectious variants are currently circulating”).

He states that to “fully escape”, the highly mutable virus, “only needs to add another few mutations in its receptor-binding domain”.

His real worry though, or as he puts it, “beyond worried”, is that the humankind may severely damage it’s own, natural ‘innate’ immunity, because of the mass deployment of vaccination programs at this critical juncture. Our ‘innate’ immunity would be lost (a rich, variant-nonspecific, form of natural immunity).

It would also mean that vaccine-mediated protection would be lost. 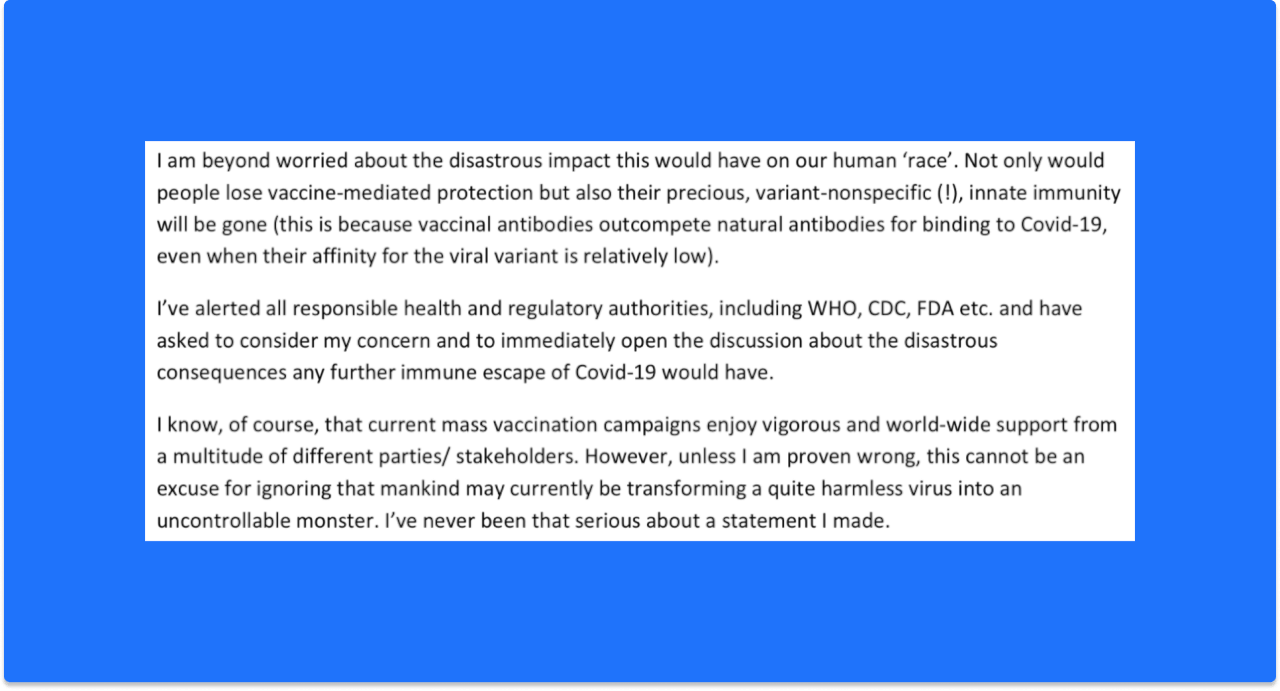 All whilst new, more dangerous variants would be getting actively breed by mankind. In effect, “turning a relatively harmless virus into a bioweapon of mass destruction”.