Market Wrap: Cryptos Are Higher After a Volatile Week

Market Wrap: Cryptos Are Higher After a Volatile Week

Some analysts remain cautious and expect lower price returns for bitcoin over the next few months.

Most cryptocurrencies traded higher on Friday as bearish sentiment waned. It appears that short-term buyers have returned from the sidelines, although technical indicators show limited upside from here.

Bitcoin (BTC) returned toward the $30,000 price level and was up by as much as 5% over the past 24 hours. Still, momentum signals remain negative on the charts after BTC’s 17% dip over the past week.

For now, cryptos and stocks are experiencing a relief bounce, which could last for a few more days. Alternative cryptos (altcoins) outperformed on Friday, which reflects a greater appetite for risk among traders. For example, ICP, MANA and DOGE rallied by more than 20% over the past 24 hours.

Meanwhile, the Terra blockchain resumed activity on Friday following a nine-hour halt. The LUNA token continued to trade below 1 cent at the time the network was halted.

Also, on Friday, the Grayscale Bitcoin Trust’s (GBTC) discount widened to an all-time low of 30.79%. The recent crypto sell-off also may have contributed to a wider GBTC discount. (Grayscale is a CoinDesk sister company.)

Stablecoin supply contraction signals a degree of net capital outflow from the cryptocurrency industry at large, according to Glassnode. “Overall, there are a number of signals of net weakness in the space, many of which indicate that risk-off sentiment remains the core market position at this time,” Glassnode wrote in a blog post. 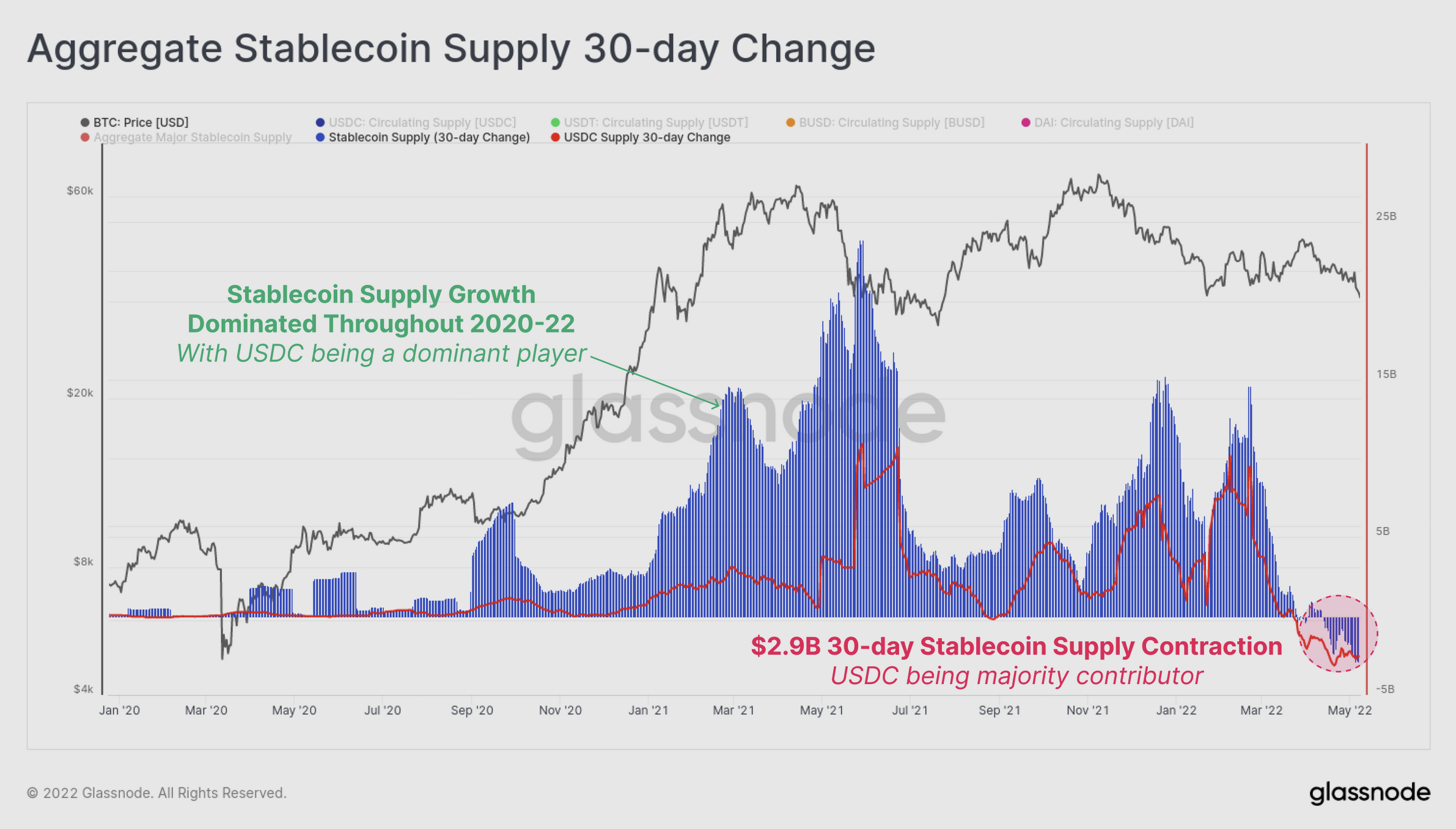 Interestingly, Tether’s USDT has seen its supply continue to expand over the same period of USDC outflows. But since the start of April the aggregate stablecoin supply has plateaued.

It remains to be seen if trust in stablecoins will return following Terra’s faulty experiment using algorithms. Some stablecoin issuers have assured market participants that not all stablecoins are the same (some are backed by cash-like instruments, while others try to maintain their value based on an algorithm that balances the stablecoin with a partner token). But recent episodes have exposed instability in the so-called stable corner of the crypto universe.

For now, cryptos could face additional volatility ahead, which could keep some buyers on the sidelines (in stablecoins or cash).

Despite the recent price bounce, bitcoin’s forward returns following a peak-to-trough decline of 55% or more tend to be flat or negative over the following six months, according to Delphi Digital. 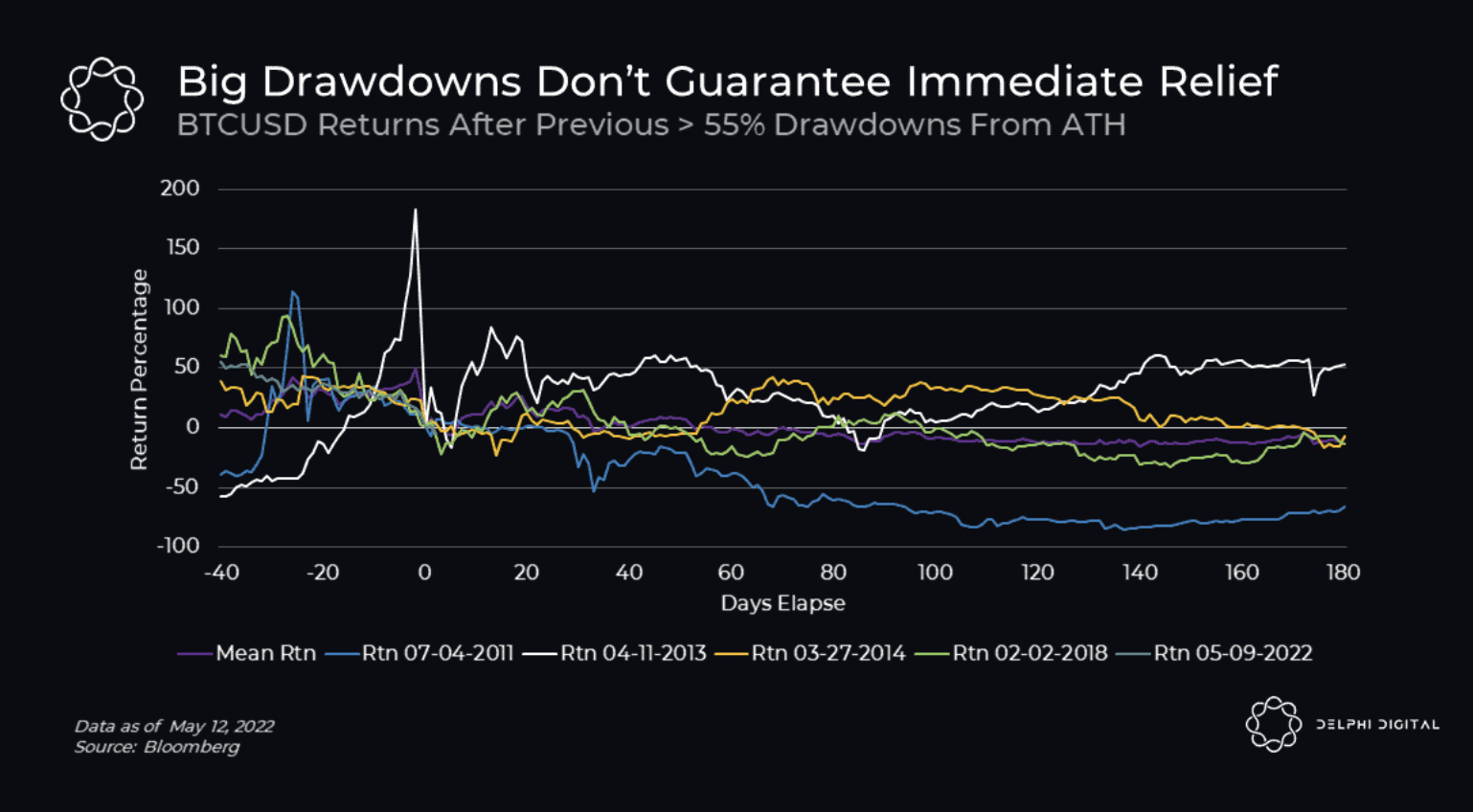 Most digital assets in the CoinDesk 20 ended the day higher.

There are no losers in CoinDesk 20 today. 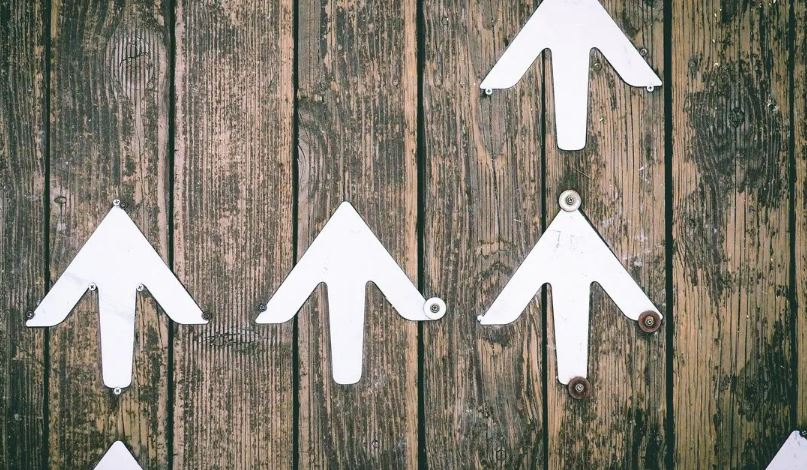 PrevPreviousWhat Ukraine’s Block on Russian Gas Means for Europe
NextThe Collapse of UST and LUNA Was Devastating, but There Is Still Hope for CryptoNext