Marc Andreessen, Brian Armstrong and Tyler Winklevoss have been cut out of the Twitter founder’s timeline.

To the uninitiated, it sounds like a bunch of rich guys arguing over how many angels can dance on the head of a pin.

But beyond Twitter drama, Block Inc. CEO Jack Dorsey’s public sparring with venture capitalists over “Web 3″ serves as a proxy for a long-running debate – not only about which cryptocurrencies are best but what they are good for.

The contretemps highlights important questions about what a truly decentralized internet would really look like, and what role different stakeholders have in building it. Dorsey, a longtime Bitcoin aficionado, appears to have aligned himself with the so-called maximalists, a camp highly suspicious of any rival to the original cryptocurrency and any non-monetary application of the underlying technology.

Both sides of the Web 3 debate bemoan the current state of the internet, dominated by a handful of large platforms (not least of all Twitter, where Dorsey stepped down as CEO last month). But the maximalists distrust the Web 3 crowd’s use of crypto tokens as a way to fund such projects. The fact that VCs are big holders of these tokens is, to the maximalists, damning, a classic case of “meet the old boss, same as the new boss.”

Web 3 advocates, which include but are not limited to VCs, counter that a variety of approaches is needed to make good on the internet’s liberating promise; that tokens can align participants’ interests in a network; that Web 3 developers’ reliance on VCs is a perverse consequence of outdated securities laws; and that while Bitcoin was a bona fide breakthrough, its utility is limited and the purists are being shortsighted.

Since his controversial tweet on Dec. 20, declaring that VCs, not users, control Web 3, thus making it a “centralized entity with a different label,” Dorsey has gone on an unfollowing spree on the social network he co-founded and ran for years.

Proponents of Bitcoin, like Dorsey, have long touted the network’s utility as a tool of liberation to be used by the people, as a way to resist financial censorship and protect against hyperinflation. On that score, few if any in the Web 3 camp would likely disagree.

The ongoing debate centers around the level of decentralization in the burgeoning Web 3 space, which big investors have been pouring money into – and, in the eyes of their critics, gaining outsized control of in exchange.

Dorsey has been increasingly critical of non-Bitcoin crypto projects, which he sees as going against the decentralized ethos of Bitcoin, culminating in Monday night’s Twitter spat.

Balaji Srinivasan, former CTO of Coinbase and a former partner at a16z, responded to Dorsey’s tweet to voice his disagreement and point out how Twitter’s own corporate interests shaped the company in ways that betrayed its early slogan, “the free speech wing of the free speech party.”

“Web 3 offers the possibility, not guarantee, of something better,” Srinivasan tweeted.

“All false,” Dorsey replied, kicking off a fight that has lasted well into Wednesday and shows no sign of slowing down. 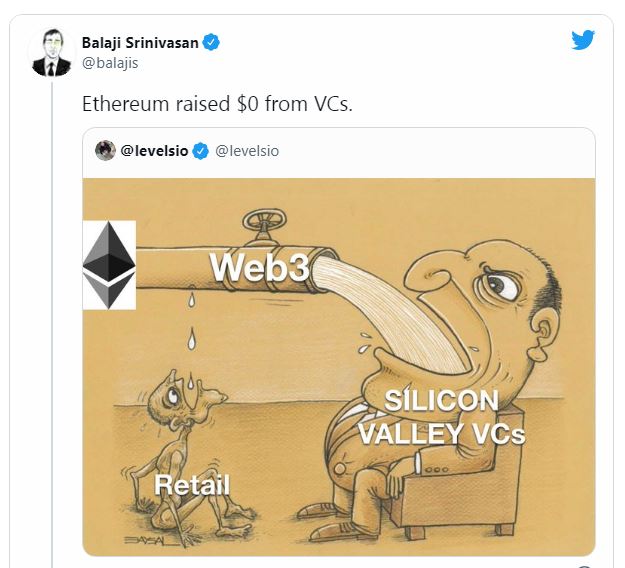 On Dec. 21, Dorsey re-tweeted an unflattering cartoon depicting an Ethereum-enabled Web 3 faucet pouring water into the waiting mouth of a corpulent venture capitalist, while a starving retail investor waited for droplets to fall on his tongue. In a quote-tweet of this post, Srinivasan pointed out that the Ethereum project was initially funded in 2014 by a public crowdsale, not through a venture capital round.

Later that evening, Dorsey tweeted more directly: “The VCs are the problem.”

Dorsey’s pot-stirring is reminiscent of another Big Tech CEO with a finger in the crypto pie – Elon Musk, who also joined the fray on Monday night, tweeting “Has anyone seen web3? I can’t find it.”

Dorsey’s reply was a thinly-veiled reference to Andreessen Horowitz’s domination of Web 3: “It’s somewhere between a and z.”

A16z bought $80 million in Twitter shares in 2011 on the secondary market.

Dorsey, for his part, seems to be taking the heat in stride.

After unfollowing a host of prominent Web 3 supporters, Dorsey has gone on a following spree, adding several bitcoin maximalists and open-source software contributors. 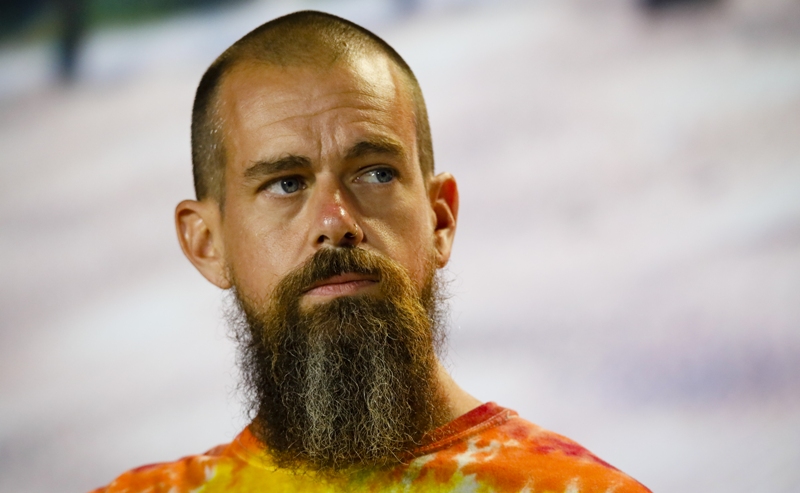 PrevPreviousHow To Do the Spike Protein Detox?
NextFrom a Bitcoin Crash to Regulatory Crackdowns: Analysts Give Their Top Predictions for Crypto in 2022Next