Binance, the world’s largest exchange, said “unilaterally” banning users “would fly in the face of the reason why crypto exists.”

Faced with a request by Ukrainian leadership to freeze the accounts of all people in Russia and Belarus, major crypto exchanges are steadfastly refusing, saying the tactic would unfairly harm civilians and “fly in the face” of the crypto community’s libertarian ideology.

In a tweet, Vice Prime Minister of Ukraine Mykhailo Fedorov publicly asked the world’s major crypto exchanges over the weekend to freeze all accounts of the Russian people, as well as the people of Belarus, a Putin ally, rather than only those entities who have been legally sanctioned, thereby placing additional domestic pressure on Russia to end its war on Ukraine.

Do you work at a crypto exchange? From a non-work device, contact our reporter at maxwell.strachan@vice.com or via Signal at 310-614-3752 for extra security.

Instead of joining the military defense, the U.S. and European Union have attempted to cripple Russia’s economy by aggressively sanctioning Russian banks, sovereign debt, and leadership, leading the Russian ruble to plunge in value. At the same time, cryptocurrency has emerged as a site of contest, with millions of dollars in crypto being donated to Ukraine while observers wonder if Russia will turn to the blockchain to escape sanctions.

A spokesperson for U.S.-based exchange Coinbase told Motherboard that the company will not comply with the request to ban all Russian users, citing “economic freedom” and the harm that a ban would bring to average Russians, but that it is complying with existing sanctions.

”At this time, we will not institute a blanket ban on all Coinbase transactions involving Russian addresses. Instead, we will continue to implement all sanctions that have been imposed, including blocking accounts and transactions that may involve sanctioned individuals or entities,” the spokesperson said in an emailed statement. “Our mission is to increase economic freedom in the world. A unilateral and total ban would punish ordinary Russian citizens who are enduring historic currency destabilization as a result of their government’s aggression against a democratic neighbor. We remain vigilant as this invasion evolves and are deeply committed to playing our part.”

Coinbase conducts sanctions screening as part of its onboarding process, the spokesperson said, and blocks transactions between sanctioned entities as well as uses analytics to identify illicit transactions.

Binance, the world’s largest crypto exchange, is complying with the sanctions, but a spokesperson for the company said it would not honor Fedorov’s request and “unilaterally freeze millions of innocent users’ accounts,” CNBC reported.

“Crypto is meant to provide greater financial freedom for people across the globe. To unilaterally decide to ban people’s access to their crypto would fly in the face of the reason why crypto exists,” the spokesperson told the outlet.

Johnny Lyu, CEO of the crypto exchange KuCoin, similarly told CNBC that the company considered itself “a neutral platform” that would not do anything beyond what is legally required, adding it didn’t support “actions that increase” tensions.

Jesse Powell, the CEO and co-founder of the U.S.-based Kraken Exchange, went further in a Twitter thread Sunday evening, saying that while he understood “the rationale for this request,” he would not freeze all Russian accounts unless legally required to do so.

Powell said such a request went against Bitcoin’s “libertarian values” and that crypto was supposed to be “a weapon for peace, not for war.” He added that the company’s own mission was to bring people into the “world of crypto, where arbitrary lines on maps no longer matter, where they don’t have to worry about being caught in broad, indiscriminate wealth confiscation.”

“Our mission is better served by focusing on individual needs above those of any government or political faction,” he added. “Besides, if we were going to voluntarily freeze financial accounts of residents of countries unjustly attacking and provoking violence around the world, step 1 would be to freeze all U.S. accounts. As a practical matter, that’s not really a viable business option for us.”

Powell also warned Russian users that a requirement to block all of their transactions “could be imminent.” 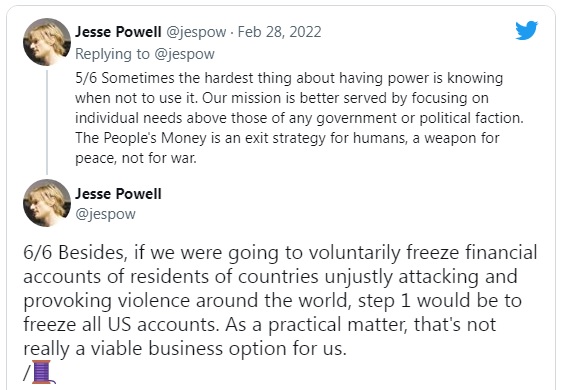 The frustration with Ukraine’s request is just the latest instance of the infamously freewheeling crypto industry reconciling its own ideology with governments’ priorities. While obligated to follow the law in the jurisdictions where they operate, for example, crypto companies still bristled when the Canadian government ordered exchanges and other firms to block certain addresses tied to the anti-vaccine mandate “freedom convoy” protests.

Canadian exchange Coinberry, for example, told Motherboard that it would “make every effort to protect our users from any form of overreach or unlawful action which may infringe on their rights” after receiving the order from authorities.

Instead of applying pressure on Russia beyond existing sanctions, the crypto community has broadly responded to the Ukraine crisis by raising money. Investors have directed crypto toward the Ukrainian military, bought the NFTs of Ukrainian artists and developed Ukraine-focused DAOs and war-related tokens. Binance, for its part, has committed to $10 million in donations and kicked off a crypto fundraiser on Monday with a $20 million goal.

One startup, the Ukrainian NFT and virtual in-game items marketplace DMarket, did take action more aggressively over the weekend—freezing the accounts of Russian and Belarusian users, disallowing the use of the Russian ruble, and disallowing new registrations originating from either country. 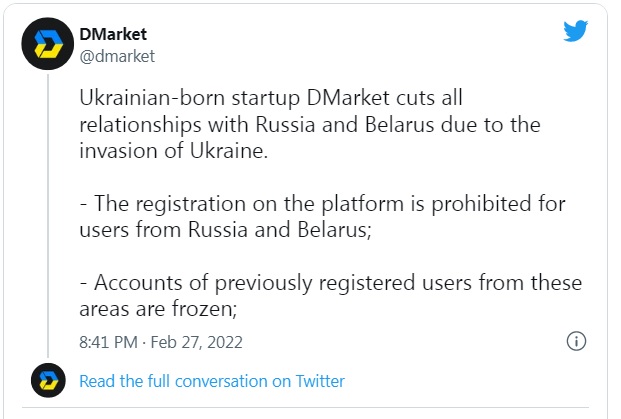 The decision will likely cost the company—the CEO told Axios Sunday that 30 percent of its user base is in Russia and Belarus—but DMarket has shifted its priorities, focusing on evacuating its employees from Ukraine and raising money for the Ukrainian military effort. After hearing the news of DMarket’s decision, some crypto enthusiasts lambasted the company while Fedorov praised it, calling DMarket modern-day “Robin Hoods.” 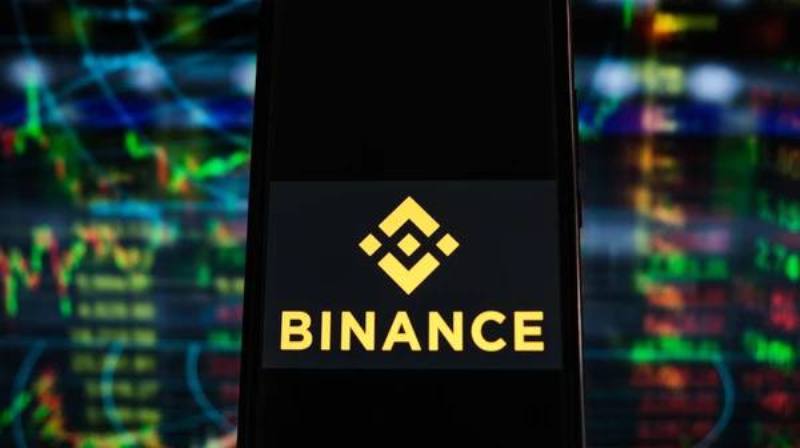