A wave of sanctions hitting Russia highlights the complex web of connections that make up contemporary global society – and its ultimate fragility.

Vladimir Putin’s Russia is facing a wave of truly unprecedented financial sanctions in retaliation for its widely scorned invasion of Ukraine. The sanctions have suddenly revealed the massive power that lay dormant in the unified global banking system for decades. But it likely also marks the beginning of that power’s end, and the dawn of something more fragmented.

Russia’s dependence on systems like SWIFT bank messaging, correspondent banking and ApplePay is a product of the global dominance of a unified market-capitalist status quo. This status quo represents the neoliberal “End of History” that was widely presumed to have arrived with the fall of the Soviet Union. But there may be no better sign of the end of the End of History than the weaponization of finance happening right now.

The scope of sanctions hitting Russia over the last week has showcased the incredible web of nested cross-border interdependencies that make up the fabric of essentially every contemporary society – and their ultimate fragility. Some Russian banks have been disconnected from the SWIFT messaging system crucial to international transfers. Shares in one of Russia’s largest banks collapsed 95% on the London Stock Exchange. The ruble has declined by roughly 50% against the dollar in just a week, a body blow to the Russian economy that would have long-lasting effects even if it is a short term dip – which it won’t be.

Trade restrictions are looking just as devastating. Taiwan has said it will halt semiconductor exports to Russia. Industry observers believe the Russian commercial airfleet, made up largely of Boeing and Airbus planes, is two to three weeks away from complete shutdown because of an embargo on parts. Apple Pay and other consumer payments services have been cut off for some customers, reportedly causing disruptions including slowdowns in Moscow’s subway system.

The total impact reaches down into the very guts of Russian society. It was seemingly not much of an exaggeration, then, when France’s finance minister promised on Tuesday, March 1 that “We are going to cause the collapse of the Russian economy.”

All of this should be considered in a longer historical context – until recently, such opportunities for disruption simply didn’t exist. SWIFT was not created until 1978. As recently as the middle of the 20th century, international banking still regularly involved shipping large amounts of gold around on boats.

The most frankly insane element of the sanctions, though, is the freezing of the global foreign exchange reserves of Russia’s central bank. This is possible because, as London School of Economics visiting fellow Ousmene Mandeng explained to the Financial Times, “foreign exchange reserves are not held by central banks” but instead by other banks around the world. “Securities and money never move, everything is external.”

This is believed to have affected fully half of the reserve holdings of Russia’s central bank, which recently totaled more than $630 billion. These sizable reserves, according to National Public Radio, were part of a long-term plan to make Russia “sanction proof.” This strongly suggests that Putin has made a massive geopolitical miscalculation about the nature of the global financial system. Russia has behaved as if it trusted European and American central banks to continue honoring its reserves even after an invasion of Ukraine. This would have allowed Russia to continue propping up the value of the ruble, among other things, for months, even in the face of sanctions.

Russia has refused to recognize the sovereignty and property rights of Ukraine, so it has few legs to stand on while complaining about having its lunch money stolen. But these sanctions will also permanently undermine the widespread assumption that global banking is a merely neutral and rules-based system. Adam Tooze, writing in Chartbook, argues that “To do this [reserves freeze] to a fellow central bank involves breaking the assumption of sovereign equality and the common interest in upholding the rights to property.” As Matt Levine pointed out with predictable brilliance at Bloomberg, the sanctions have driven home that the global banking system, like most monetary systems, amounts to “a way to keep track of what society thinks you deserve.”

This is an excellent way to think about the yen for “hard money” that motivates many bitcoiners. While there are ways for nation-states to restrict the movement of bitcoin, such as enjoining its sale via exchanges, bitcoin stored in an on-chain wallet cannot be seized or frozen by the kind of decrees that have cut Russia off at the knees. Bitcoin could be described as a “digital bearer instrument,” and can be moved, bought and held without third parties or intermediaries outside of its own network.

This gives new resonance to characterizations of bitcoin as “digital gold.” Gold has always been a particularly useful instrument during wartime or other disruptions, because its value is considered inherent to the object. (Gold rose nearly 10% in February amid rumors of war). Bitcoin is far more mobile than gold, but also has some disadvantages: in particular, gold has no memory, while the transaction history of each bitcoin is preserved on the blockchain. That presents real potential problems for the trade in formerly “dirty” coins, which could wind up blacklisted by mainstream exchanges even after they’re no longer owned by a global pariah.

Still, what we’re seeing is a significant vindication of the underlying skepticism of traditional banking that drives many in crypto, and particularly those committed to Bitcoin specifically. It is arguably the exclamation point after years of smaller examples of financial sanctions against groups ranging from sex workers to Canadian truckers.

That doesn’t mean bitcoiners are dancing in the streets, though, any more than someone warning about the U.S. infrastructure deficit should celebrate when a bridge collapses. While Bitcoin is a useful object lesson and model for what a neutral global payments system could look like, it is unlikely that the near future will see huge states using bitcoin or other cryptocurrencies to depart the banking status quo. Instead, there is considerable speculation among finance professionals that Russia could begin conducting trade using China’s renminbi and banking infrastructure. Though the dollar is currently surging as a safe haven, a Russian move to RMB could significantly accelerate the ongoing decline of the dollar’s global dominance.

That would be a major step towards the repolarization of a world we once thought of as geopolitically flat – or just proof that the dream of neoliberal universality was a delusion all along. 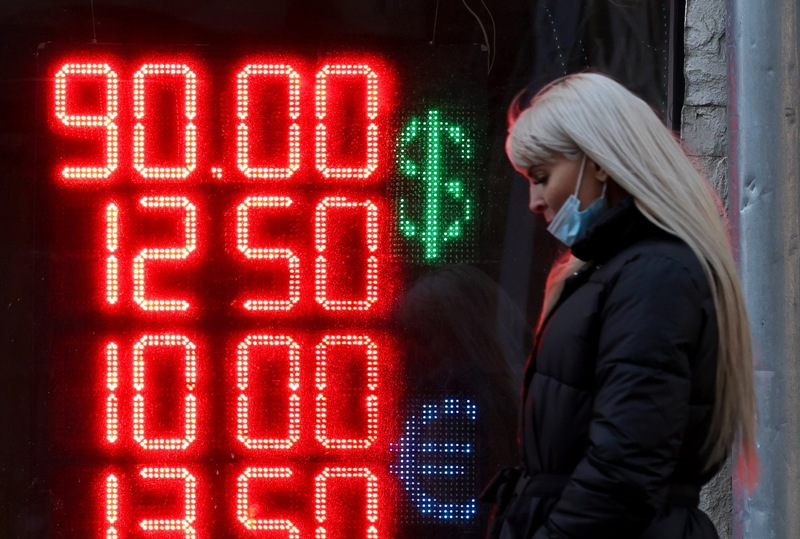 PrevPreviousCrypto Exchanges Refuse To Freeze All Russian Accounts
NextThe U.S. Strategy Is To Build an Anti-Russian Belt Through the Intermarium (Countries From Poland to Bulgaria), Cutting Russia and Germany Off From Each OtherNext