After a horror month, bitcoin has rallied and is pushing back to near the all-important US50,000 mark.

In the last 24 hours bitcoin has lifted by a staggering 10 per cent to US$47,721, adding US$2 trillion to the crypto market. At one point it was worth more than US$48,000 but has dropped a little from the peak.

That’s the highest the digital coin has been in the past four weeks after being hit by three successive events that reduced consumer confidence and prompted mass sell-offs.

After an initial rise in price ahead of El Salvador’s switch to bitcoin as legal tender in early September, the cryptocurrency soon dropped following a botched rollout in the South American country.

It plunged an estimated $US400 billion in a single day after news of El Salvador’s crypto glitch broke, with bitcoin dropping from US$50,000 to $US43,0000.

Then, just two weeks later, bitcoin was hit again following fears of the collapse of Chinese property developer Evergrande, plummeting to US$42,000.

The beleaguered coin then was hit with a triple whammy — last weekend, China’s central bank declared that any transaction involving a cryptocurrency was illegal.

Bitcoin unsurprisingly fell again, to US$40,000 at the peak of the panic.

Bitcoin unsurprisingly fell again, to US$40,000 at the peak of the panic. Bitcoin’s dramatic rise in the past 24 hours.

Despite bitcoin’s rocky month of September, October is off to a good start following the crypto’s rise to $47,000.

Some analysts told Reuters that October is typically a bullish month for digital commodities, while September historically a bearish period for the sector.

Online, some referred to the rise as “Shocktober”.

However, there’s more to it than simply the time of year.

Some suspect that an assurance from the US government has buoyed the market.

On Friday local time, US Federal Reserve Chairman Jerome Powell — who runs the country’s central bank — made a breathtaking promise.

He told Congress the central bank had “no intention” of following in China’s footsteps by banning cryptocurrencies.

However, the US bank didn’t think the same way, although they did add that the coins did need more regulatory oversight. 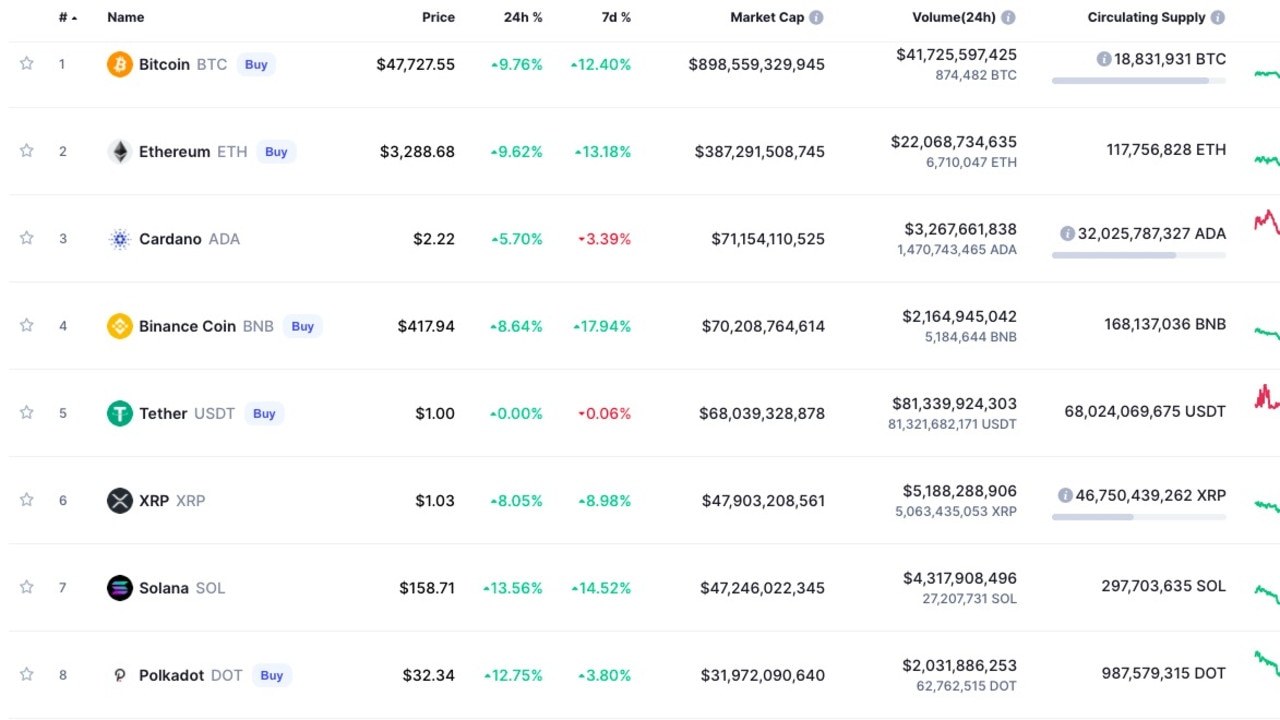 Bitcoin isn’t the only cryptocurrency picking up in value over the last day; most of the other top coins are also in the green zone on the price chart.

Like bitcoin, binance dropped by more than 10 per cent while Ripple XRP fell by a staggering 12 per cent at the height of some of the sell-offs.

Even cardano and solana — which have mostly remained immune to other price drops — both plunged by about 10 per cent also.

However, they’ve since recovered.

PrevPreviousHow Rich Is the Rockefeller Family Today?
NextDeaths Among Teenagers Up 56% Since Vaxxine Roll-Out BeganNext