Bitcoin and cryptocurrency prices have fallen sharply, wiping around $300 billion worth of value from the combined crypto market in just two days.

The bitcoin price dropped to around $51,000 per bitcoin after trading around $69,000 just weeks ago—a fall of almost 30%. The latest move lower has seen other major cryptocurrencies, including ethereum, Binance’s BNB, solana, cardano and Ripple’s XRP, each lose almost 10% in just 24 hours.

The sudden bitcoin and crypto sell-off, coming alongside some serious stock market declines, follows a warning made by famed investor Louis Navellier that widely-expected Federal Reserve “tapering” could burst the bitcoin and crypto bubble.

“The Fed is tapering, and this should create a correction in risk assets, of which bitcoin is a part,” Navellier wrote in comments first reported by Insider. “The more the Fed tapers, the more volatility we should see in both stocks and bonds—and yes, bitcoin, too.”

Navellier warned the bitcoin price could drop below $10,000 per bitcoin, a fall of more than 80% from its all-time high set last month of almost $70,000. The bitcoin price has recorded similar such declines in the past, although bullish bitcoin and crypto investors remain confident bitcoin’s price is going far higher in coming years. 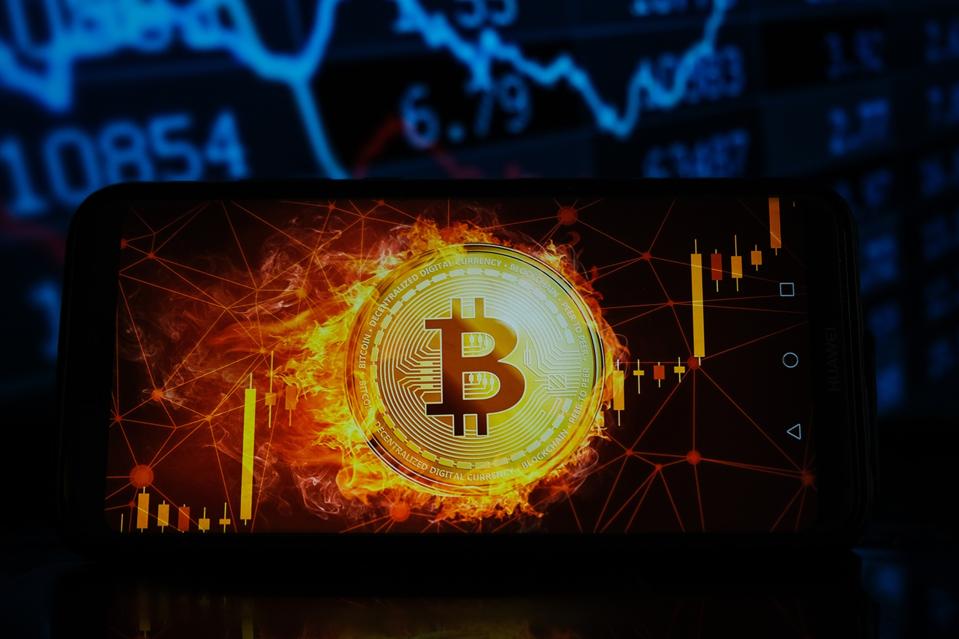 The bitcoin and crypto market has fallen sharply, with ethereum, Binance’s BNB, cardano, solana and XRP going into free fall.

“I would take a decline below $46,000 (the 200-day moving average) to be a yellow flag and a decline below the spring low of $28,500 to be a completed massive double top which points to a decline to below $10,000, which incidentally would match many of the multiple 80%+ declines in its storied history,” Navellier wrote.

Navellier, who’s been watching markets and picking stocks since the 90s, pointed to huge advertisement spending by crypto companies as evidence of mania in the bitcoin and crypto market. Trading platforms such as Crypto.com and FTX have raised eyebrows with multi-million dollar campaigns and sponsorship deals in recent months. 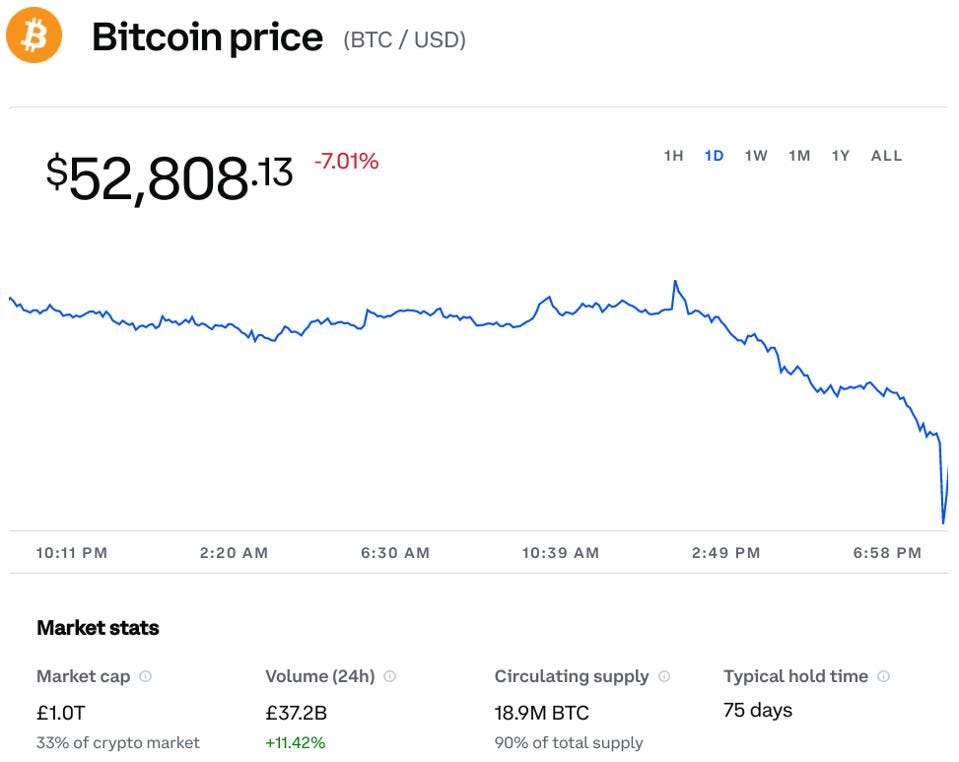 The bitcoin price has lost almost 10% over the last 24 hours, plunging to lows of around $51,000 per bitcoin—a level not seen since early October. Meanwhile, other major coins, including ethereum, BNB, solana, cardano, and XRP, have also tanked.

The blistering bitcoin price bull run—taking the cryptocurrency from lows of $4,000 in March 2020 to highs of around $69,000 last month—began last year at least in part due to the massive stimulus measures undertaken by the U.S. Federal Reserve and other central banks around the world in response to the economic hit of the Covid-19 pandemic and lockdowns put in place to contain it.

The bitcoin rally has boosted the combined cryptocurrency market capitalization from around $500 billion this time last year to highs of $3 trillion last month. Much of those gains came from huge price increases in smaller cryptocurrencies, with ethereum and its rivals Binance’s BNB, solana, cardano all far outpacing bitcoin over the last 12 months.

The Fed is now beginning to “taper” its lose economic policy following a sharp rise in inflation and an almost fully-recovered labor market. While November’s employment data came in under expectations, the unemployment rate fell to 4.2%, down from 4.6% in October—its lowest point in more than a year.

“Rarely has a headline number been so misleading,” Jay Mawji, managing director of the global liquidity provider IX Prime, wrote in emailed comments. “Sure, the 210,000 new jobs created in November was a big miss. But clear-eyed marketwatchers are viewing it as a distraction rather than a disappointment. Dig deeper into the numbers and this jobs report reveals a robust labour market.”

“In an odd twist, the lower growth paired with potential supply chain issues from the new omicron variant may actually cause the Fed to raise rates more aggressively than previously thought—all in an effort to fight rising inflation,” Jay Pestrichelli, the CEO of Florida-based investment firm Zega Financial, told Forbes.

PrevPreviousMurder! Just Hours After Publishing the Secret of the Vaxx, Dr Noack Is Dead
NextBlockchain.com to Introduce NFT Marketplace as Interest BoomsNext